Challenges to Democracy in the 21st Century
Free Preview 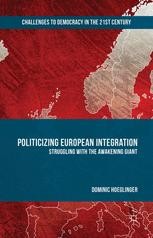 Struggling with the Awakening Giant

This book offers a comprehensive treatment of the timely question of the politicization of European integration. It shows how this issue's complex linkages with traditional political divides pose a tough challenge to politicians and lead to bitter framing contests about its actual meaning.

Dominic Hoeglinger is Senior Lecturer at the Department for Political Science, University of Zurich, Switzerland. His research interests lie in political communication, the politics of European integration, and political conflict more generally. He has published articles in journals such as European Journal for Political Research and co-authored Political Conflict in Western Europe (2012).

'The question of politicizing European integration is not only an important question for scholars. It is also a central question in the public debate about the legitimacy of the European Union. With its novel theoretical ideas and impressive data, this book is a must for everyone interested in this question.' Christoffer Green-Pedersen, Professor of Political Science, Aarhus University, Denmark

'Hoeglinger's study introduces much-needed nuance into academic debates on the politicization of European integration. His account of limited and differentiated politicization primarily manifesting itself in competition between political parties, not debates in the broader citizenry counterbalances a number of exaggerated claims in the literature that miss the true complexity of the phenomenon.' Achim Hurrelmann, Associate Professor and Director of the Institute of European, Russian and Eurasian Studies, Carleton University, Canada

'This book is a comprehensive analysis of a topic that has come to frame scholarly debate about Europe the politicization of European integration in domestic contestation. Dominic Hoeglinger engages the core issues in this debate with skill and clarity. The result is a keenly reasoned and empirically rich account that is a vital resource for all those interested in the politics of Europe.' Gary Marks, Burton Craige Professor, UNC-Chapel Hill, USA, and Chair in Multilevel Governance, VU Amsterdam, Netherlands