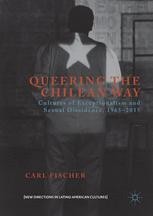 Cultures of Exceptionalism and Sexual Dissidence, 1965–2015

This book examines and critiques the fact that Chile’s claims to economic exceptionalism have been embodied, often quite aggressively, in a heterosexual, and primarily male, ideal. Despite the many shifts Chilean economics and politics have undergone over the past fifty years, the country’s view of itself as a “model” in contrast to other Latin American countries has remained constant. By deploying an artistic, literary, and cinematic archive of queer figures from this period, this book draws parallels among the exceptionalisms of Chile’s economic discourse, the subjects deemed most (and least) apt to embody it, and the maneuvers of its cultural production between local and global ideas of gender and politics to delineate its place in the world. Queering the Chilean Way thus sheds light on the sexual, economic, and aesthetic dimensions of exceptionalism—at its heart, a discourse of exclusion that often comprises a major element of nationalism—in Chile and throughout the Americas.

Carl Fischer is Assistant Professor of Spanish in the Department of Modern Languages and Literatures at Fordham University, USA. His work has been published in American Quarterly, Argus, Cine chileno en dos siglos, and Critical Matrix. He previously worked as a translator for the Chilean government, as well as for numerous international, community, and academic organizations. He received his PhD from the Department of Spanish and Portuguese Languages and Cultures at Princeton University, USA.

“Since the founding of the Chilean nation, political and economic elites have repeatedly claimed that Chile is an ‘exceptional’ success story within Latin America. Fischer brilliantly traces a genealogy of Chilean exceptionalism to show how heterosexual, masculine fantasies of difference have managed to violently exploit, exclude, or eliminate sexual minorities, indigenous peoples, workers, and women from the ‘Chilean Way’ … A must read whose resonance extends far beyond Latin America.” (Michael J. Lazzara, Associate Professor of Latin American Literature and Culture, University of California, Davis, USA)

“Fischer critiques the discourse of exceptionalism, showing the fractures and faults that have been officially obscured. The book makes visible a multiplicity of voices and a wide range of diversity in the Chilean nation through an examination of gender and male hegemony. It advances the inquiry on modernity in Chile to include women, gays, transgendered subjects and other social minorities that end up queering Chilean imaginary.” (Bernadita Llanos M., Brooklyn College, CUNY, USA, and author of “Passionate Subjects/Split Subjects in Twentieth-Century Literature in Chile” (2009))