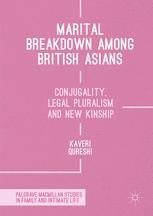 Against long-standing characterizations of British Asians as ‘flying the flag’ for traditional life, this book identifies an increase in marital breakdown and argues to reorient debates about conservatism and authoritarianism in British Asian families. Qureshi draws on a rich ethnographic study of marital breakdown among working class Pakistani Muslims in order to unpick the grounds of marital conflict, the manoeuvres couples undertake in staying together, their interactions with divorce laws and their moral reasonings about post-divorce family life. Marital Breakdown among British Asians argues against individualization approaches, demonstrating the embeddedness of couples in extended family relations, whilst at the same time showing that Pakistani marriages and divorces do not deviate in all respects from wider marital separation trajectories in Britain. Providing new insights into how marital breakdown is changing the contours of British Asian families, this book will be essential reading for scholars and students, clinicians working in couple or family therapy, social workers and legal practitioners.

Kaveri Qureshi is Research Fellow at the University of Oxford, UK. Her research interests include migration, gender, family life, and how people deal with transitions.

“Qureshi … offer[s] an authoritative account of marital breakdown and divorce among British Pakistanis that attends to gender dynamics within marriages, families, and communities as they intersect with dynamics of class, race, and immigration. … Marital breakdown among British Asians stands as an important contribution which will be of interest to researchers, professionals, and activists working on the politics of immigration, family life, and gender in the United Kingdom and beyond.” (Wiebe Ruijtenberg, Journal of the Royal Anthropological Institute, Vol. 26 (3), 2020)

“I thoroughly enjoyed the book, and … . the book provides a rich and timely insight into the turmoil of immigrant families breaking up.” (Anika Liversage, Nordic Journal of Migration Research NJMR, May 28, 2020)

“The objective of Marital Breakdown among British Asians is to fill the gap in research investigating marital breakdown in South Asian communities … . The book is well-written and canvasses concepts and approaches from legal anthropology in an accessible way. It will be of interest to scholars of minority families in the West … .” (Muhammad Zubair Abbasi, PoLAR Political and Legal Anthropology Review, August 22, 2019)

“This timely and important study, based on intensive fieldwork, examines the fallouts of rising divorce rates in Asian families. Focused on British Pakistani Muslims, it assesses how men and women view and handle divorce, frequently in an extended family context, an environment of legal plurality and with the potential to develop new kinship patterns. While British Asian families seem increasingly experienced as illness-inducing scenarios, the study skilfully differentiates particular socio-cultural contexts and leaves readers to draw their own conclusions about the advisability of opting for divorce.” (Werner Menski, SOAS, University of London, UK)

“The marital practices of British Asians are time and again subject to stereotypes marking them as exemplar families with strong values and low divorce rates. Kaveri Qureshi’s book on divorce amongst British Asian groups makes a significant contribution, as she documents a rise in marital breakdown and new cultural understandings and negotiations of marital expectations, intimacy and gender equality. This is a richly illustrative journey that challenges Euro-American theories and popular scholarly predications that typically conflate rising divorce in Western societies with modern individualism. Qureshi has painstakingly and with great nuance, delineated a complex and deeply emotive phenomenon of our times. Her lucid narrative of contemporary social change, transformations in intimacy, transnational marriage and legal pluralisms will be of interest to wide audiences.” (Shalini Grover, Institute of Economic Growth, India)

“A stunning, highly original book on a subject which is only now becoming the topic of multidisciplinary research: marital breakdown and divorce among British South Asians. Lucidly written and analytically coherent, the book provides a reflexive, subtle and nuanced account of how and why South Asian marriages break down, while exploding preconceived notions on this topic. Widely researched, Marital Breakdown among British Asians also allows for a comparative understanding of some of the theoretical issues at stake. Among these are debates about the changing shape of contemporary families, as well new approaches to gender, feminism and resistance.” (Pnina Werbner, Keele University, UK)