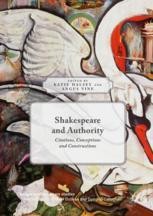 Katie Halsey is Senior Lecturer in Eighteenth-Century Literature at the University of Stirling, UK. Previous publications include Jane Austen and her Readers, 1786-1945, The History of Reading (with Shafquat Towheed and Rosalind Crone) and The History of Reading vol. 2: Evidence from the British Isles, 1750-1950 (with Bob Owens).

“Halsey and Vine remind readers of as much quite early on in Shakespeare and Authority … this book’s altogether comprehensive range, especially in relation to its varying angles of approach and expectation(s).” (David Marx, David Marx Book Reviews, davidmarxbookreviews.wordpress.com, April 23, 2019)

“Shakespeare and Authority presents thought-provoking individual chapters and, as such, is a valuable contribution to the flourishing field of Shakespeare studies. More specifically aimed at Shakespeare scholars and specialists of the early modern period, it will undoubtedly enlarge their vision of Shakespeare as poet and playwright now turned into one of the greatest artistic influences of our century.” (Sophie Chiari, cercles.com, June, 2018)
“Shakespeare and Authority is a wide-ranging and impressively researched volume which returns attention to a burning issue in early modern and modern critical debate. Interrogating received ideas on authorship, textual expectation and reception, this collection urges readers to return to a host of celebrated works with new eyes and repays re-reading.” (Andrew Hiscock, Professor of English Literature, Bangor University, UK)

“Shakespeare and Authority is an exceptionally fine collection, which includes contributions both from well-established figures in the field and from up-and-coming scholars who are producing exciting new work. Its range is comprehensive and it offers a thoughtful, scholarly, and original engagement with a crucial topic in early modern literary and cultural studies. It is a must-read volume for students and scholars alike.” (Andrew Murphy, Professor of English, University of St Andrews, UK)

“This fascinating multifaceted collection ventures to approach the subject of authority as both a preoccupation within Shakespeare’s canon as well as the key determinant of the long trajectory of his textual, dramatic, and critical reception. Together the essays give us a generous chronological and generic sweep, yet each individual essay has its own tight focus on some aspect of the complex and mutating interrelation of authority and authorship.” (Margreta de Grazia, Emerita Sheli Z. and Burton Z. Rosenberg Professor of the Humanities, University of Pennsylvania, USA)