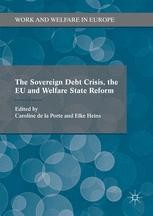 The Sovereign Debt Crisis, the EU and Welfare State Reform

This book offers a much-needed analysis of how the European Union (EU) has affected welfare state reforms in the Member States most severely hit by the 2008 economic crisis. Bringing together leading European social policy researchers, it shows that the EU’s responses to the sovereign debt crisis have changed the nature of EU intervention into domestic welfare states, with an enhanced focus on fiscal consolidation, increased surveillance and enforcement of EU measures. The authors demonstrate how this represents an unprecedented degree of EU involvement in domestic social and labour market policies. Readers will also discover how greater demands to attain balanced budgets have been institutionalized, leading to tensions with the EU's social investment strategy. This highly informative edited collection will engage students, social policy practitioners and researchers, scholars of the welfare state and political scientists.

Caroline de la Porte is Associate Professor at the Copenhagen Business School, Denmark.
Elke Heins is Lecturer in Social Policy at the School of Social and Political Science, University of Edinburgh, UK.

“This well-edited book provides a useful and thorough analysis as well as a base for further investigation of the EU policies on member countries’ welfare state reforms in the aftermath of the 2008 economic crisis. … This book provides a timely and valuable contributions on the impact of EU policies and measures on the welfare states of the crisis-ridden member countries.” (Nazimudeen Saleem, Journal of Social Policy, Vol. 47 (4), October, 2018)

“The Great Recession has had a strong impact on the Eurozone's welfare states. This book provides an effective, empirically grounded assessment of the role played by EU institutions in shaping national reforms and adjustments. Its chapters highlight the strengthening of austerity-oriented supranational constraints and pressures, but unveil at the same time the margins of maneuver retained by the Member States, even in the presence of strong conditionality. In addition to analysing developments since 2008, the authors discuss the present problems challenges and lay out a rich agenda for future research.” (Maurizio Ferrera, Università degli Studi di Milano, Italy)

“The editors have succeeded in drawing together a theoretically coherent and incisive set of chapters analysing the way the EU has affected welfare state reforms in the Member States most severely hit by the crisis. A timely contribution for anyone interested in understanding the on-going effects of the crisis and a must read for students and scholars interested in EU policy and in welfare reforms.” (Nathalie Morel, Sciences Po, France)

“This book contributes with in-depth policy analyses of how some of the most crisis stricken European countries have responded to intrusive EU interventions. It demonstrates how EU-level policy is causing divergence among EU Member States, against the fundamental objective of the EU to promote convergence among countries and social cohesion within populations.” (Joakim Palme, Uppsala University, Sweden)

“This volume illustrates the conflict between the Commission’s soft-law promotion of national “social investment” policies and the hard-law requirements of fiscal retrenchment and labor market deregulation imposed on states suffering from, or threatened by the euro crisis. The conflict is obvious in the cases of “program states” like Greece and Portugal. Of particular interest, however, are the chapters dealing with Ireland, Italy and France which suggest that even without intrusive intervention by the Commission similar policies have been self-imposed by governments that are aware of the economic constraints implied by membership in the Monetary Union.” (Fritz W. Scharpf, Max Planck Institute for the Study of Societies, Germany)

“This excellent collection of in-depth studies is indispensable reading for everybody who is interested in how welfare states have been affected by the financial crisis – and few questions can be more relevant to comparative political economists and welfare state researchers.” (Waltraud Schelkle, London School of Economics and Political Science, UK)