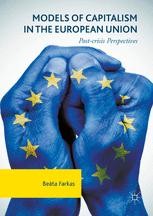 Models of Capitalism in the European Union

This book uses comparative economic analysis to provide a common conceptual framework for all current European Union member states. Based on empirical investigation, the author identifies the Nordic, North-western, Mediterranean, and Central and Eastern models of capitalism on the threshold of the 2008 global financial and economic crisis. The chapters also examine the resulting institutional responses to the crisis and the methods of crisis management adopted by each member state. The analysis reveals that the crisis has not triggered radical institutional change but, instead, highlighted deep institutional differences not between the old and new member states, but between the Nordic, North-western, Mediterranean, and Central and Eastern European countries. These institutional differences are so significant that they require the rethinking of European integration theory.
Models of Capitalism in the European Union serves as a useful handbook for academics, advanced students, policy-makers and advisors who are interested in European economic issues.

Beáta Farkas is Professor and Head of the Institute of Finance and International Economic Relations at the University of Szeged, Hungary. She joined the university after obtaining degrees in both Law and Economics, and now holds a PhD in Economics. She was the founding Dean of the Faculty of Economics and Business Administration.

“The volume represents a powerful and constructive voice in the debate on modern economic systems … . Well-argued, well-written and well-presented, this monograph will be of interest to economists and political scientists as well as experts and analysts. Due to the rich selection of graphs, tables and figures, it will prove an invaluable source for lecturers to structure their lectures and for students, at undergraduate and graduate level, as a companion to a variety of modules across the field.” (Anna Visvizi, Yearbook of the Institute of East-Central Europe, Vol. 14 (4), 2016)

“Beáta Farkas’ book provides a valuable contribution to the policy debate on what models of capitalism are feasible for the EU Member States in the post-crisis world. In particular, it raises important questions on the limitations of the new economic governance that has been introduced in recent years in changing behaviour at Member State level.” (Fabian Zuleeg, Chief Executive and Chief Economist, European Policy Centre, Belgium)

“This thorough review of the economic systems of the old and new EU member countries by Dr Farkas will give a very deep insight into how the new member countries should change their systems, and will help you understand their long-term economic performance.” (Masahiko Yoshii, Vice President and Jean Monnet Chair Professor, EU Institute, Japan, and Professor at the Graduate School of Economics, Kobe University, Japan)

“This book makes an important contribution to studies of the varieties of capitalism in the EU. On the basis of comprehensive research and original empirical analysis, Beáta Farkas identifies clusters of countries that differ in the institutional arrangements that define their economic systems. She argues that this differentiation is an asset that should be recognised by the designers of future EU integration policies. She convincingly demonstrates that while the EU is an open-ended system with an uncertain future, differentiated integration can be both a strength and a method for future development of the EU. Highly recommended reading for everyone who is interested in possible future paths for EU economic integration.” (Will Bartlett, Senior Research Fellow, London School of Economics, UK)