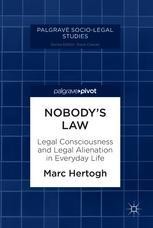 Nobody’s Law shows how people – who are disappointed, disenchanted, and outraged about the justice system – gradually move away from law. Using detailed case studies and combining different theoretical perspectives, this book explores the legal consciousness of ordinary people, businessmen, and street-level bureaucrats in the Netherlands. The empirical research in this study tells an original and alternative narrative about the role of law in everyday life. While previous studies emphasize the law’s hegemony and argue that it’s ‘all over’, Hertogh shows that legal proliferation makes it harder for people to know, and subsequently identify with, the law. As a result, official law has become increasingly remote and irrelevant to many people. The central finding presented in this highly topical text is that these developments signal a process of ‘legal alienation’— a gradual and mundane process with potentially serious consequences for the legitimacy of law. A timely and original study, this book will be of particular interest to scholars in the fields of law and society, socio-legal studies and legal theory.

Marc Hertogh is Professor of Socio-Legal Studies at the University of Groningen, the Netherlands.

“The book offers a convincing critique of existing legal-consciousness literature’s overestimation of the importance of law. … the book provides an important basis and an inspiration to move this project forward from critique to a grounded theory.” (Nienke Doornbos, International Journal of Law in Context, February 6, 2020)
“This is an important and very fertile line of enquiry for sociolegal scholars, particularly in the current era. … Hertogh makes an important contribution to legal consciousness research and offers a really helpful set of ideas for taking the research forward … .” (Simon Halliday, Social & Legal Studies, Vol. 28 (6), 2019)
“‘Nobody’s Law’ contains an array of provocative and interesting ideas. ... I suggest the book offers much that could be useful for future research on legal consciousness and legal alienation.” (Emily Rose, Journal of Law and Society, November 6, 2019)
“Marc Hertogh’s recent book Nobody’s Law makes a valuable contribution to socio-legal studies of administrative justice. The clear, well-written text published in the Palgrave MacMillan Pivot Series … . In all, this is a great read and undoubtedly a refreshing step forward for the field. It retains many of the initial concerns of legal consciousness and administrative justice studies but manages to say something distinctly new.” (Zach Richards, UKAJI, ukaji.org, October, 2018)
“Marc Hertogh presents a powerful response to those who contend that law is a constant presence in everyday life and that we continually grapple with its demands. A clear-eyed view of social life suggests a very different conclusion – for most of us, law is increasingly distant, even irrelevant. We are not dominated by law, but we are alienated from it. For the most part, we think and act without reference to legal norms and concepts. This broad-ranging investigation serves as a fine exemplar of a new generation of “legal consciousness” research that argues for a sweeping reassessment of conventional thinking about the ever-expanding role of law. Drawing on extensive empirical support, Hertogh suggests instead that law’s influence in our lives may be less than anyone would have guessed, and in contemporary circumstances it may in fact be getting smaller.” (David M. Engel, State University of New York at Buffalo, USA)

“Marc Hertogh argues that as state law’s reach into everyday life extends, popular experience of its processes often produces deep alienation from the law, sometimes even outright rejection. Using vivid case studies and synthesising a wealth of earlier research, he shows how this alienation occurs, and with what effects. His book is a major contribution to empirical sociolegal research and a powerful warning against complacency about the rule of law.” (Roger Cotterrell, Queen Mary University of London, UK)

“In this provocative and topical book Hertogh explores the extent of legal alienation amongst even mainstream social groups, drawing on case studies of reactions to anti-discrimination law, established practices of construction cartels and street- level administrators acting according to their own values. The field of 'legal consciousness studies' will never be the same.” (David Nelken, King's College London, UK)