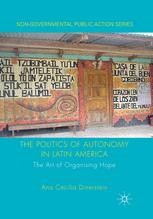 The Politics of Autonomy in Latin America

The Art of Organising Hope

The author contests older concepts of autonomy as either revolutionary or ineffective vis-à-vis the state. Looking at four prominent Latin American movements, she defines autonomy as 'the art of organising hope': a tool for indigenous and non-indigenous movements to prefigure alternative realities at a time when utopia can be no longer objected.

“The Politics of Autonomy in Latin America offers an invaluable starting point for thinking about these challenges and for confronting the limitations of fatalist critiques or naïve optimism that too often pervade debates on autonomy. More than that, it offers an open blueprint for thinking about and acting upon the idea that, within a concrete reality that continues to be overwritten by the hopelessness of neoliberalism, the seeds of hope still remain.” (Adam Fishwick, AntipodeFoundation.org, October, 2016)

“The Politics of Autonomy in Latin America: The Art of Organizing Hope serves as an exciting contribution to emerging discussions, debates, and struggles that go by the name of autonomy. Not only does it provide new trajectories for thinking about autonomous struggles, but it also serves as a review to many of the philosophical debates that have taken up autonomy in the past. Dinerstein’s analysis is accomplished through an exciting conversation between her unique theoretical approaches to autonomy, and the on the ground practices of autonomous movements in the Latin American context. It is here particularly, that the book garners its usefulness from practice to theory and everywhere in between.” (Ryan A. Knight INTERFACE: A journal for and about social movements)

“This is a major book for minor Marxism. Not only does it develop our ability to properly think through autonomy – perhaps the central concern of contemporary emancipatory movements – but it also shows us how we might go about doing this.” (David Bailey CAPITAL & CLASS)

“One of the pleasures of this book is its total disregard for the disciplinary boundaries that police contemporary academia. The range of learning on display – across philosophy, history, sociology and politics – is exemplary on many levels. These days one begins a book on autonomy or horizontalism in Latin America with a peculiar trepidation, and an abiding expectation that what lies ahead is rather too well trodden terrain. Diner-stein surprises here as well, offering genuinely novel arguments that adjust our horizons from ‘autonomy and the state’ to the prefigurative potential of social movements in a Blochian frame of hope: what she terms ‘Marx’s critique of political economy in the key of hope’, or ‘the prefigurative critique of political economy.” (Jeff Webber RADICAL PHILOSOPHY)

“The accessibility of the book is significant because it tells a very important story. The author makes a compelling case to explore the possibilities of the ‘not yet’ rather than wallow in the fatalism of the ‘not ever’.  Coming at a time when neoliberalism continues to dominate the global political and economic landscape, this is a timely and powerful message.” (Geoff Goodwin RADICAL AMERICAS)

​'Terrific and necessary. An excellent and informative account of the wonderful movements of revolt in Latin America in recent years, but it is much more than that. Latin America is not just over there (over here in my case) but an inspiration and a challenge for all of us. Even more exciting than the title is the subtitle: The Art of Organising Hope. That is what we so desperately need, that is why the book is so important, and not just for those with a special interest in Latin America.' - John Holloway, Benemérita Universidad Autónoma de Puebla, Mexico

'Ana Cecilia Dinerstein's book is a major intervention, which reframes these questions fundamentally and places the hopes, experiments, contradictions and possibilities of social movements centre-stage while recognising the specificity of Latin American and indigenous experiences. Clear and powerful, this work is badly needed.' Laurence Cox, National University of Ireland Maynooth, Ireland

'The book is terrific. It is teeming with radical scholarship' Mike Neary, University of Lincoln, UK

'What Ana Cecilia Dinerstein has done with this book is to demonstrate how the philosophy of Ernst Bloch cannot be said to exist in a purely abstract vacuum, as is often contended in western philosophical debate. She has pointed out here that the philosophy of hope, of the anticipated realisation of hope in social form, i.e. politically in the form of revolution and change, is central to his concerns and resonates in what were long seemed to be "peripheral" areas. It is no coincidence that Ernst Bloch's works have long been better known in Latin America than in the Anglo-Saxon world as his philosophy of hope bears a great deal of similarities with liberation theology in general. An essential part of his thought is that religion carries within it not only oppressive structures from above but also liberationist tendencies from below and that only when these active, creative tendencies meet up with the grinding realities of economic exploitation, then the likelihood is that some form of transformation will emerge. The strength of this book is to point out that this is an open process and that any movement towards social and political liberation is one which is only partially determined by these economic conditions in the traditional Marxist sense but is carried by the sense of hope and the pre-illuminations of what might be.' - Peter Thompson, University of Sheffield, UK