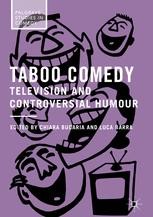 The essays in this collection explore taboo and controversial humour in traditional scripted (sitcoms and other comedy series, animated series) and non-scripted forms (stand-up comedy, factual and reality shows, and advertising) both on cable and network television.  Whilst the focus is predominantly on the US and UK, the contributors also address more general and global issues and different contexts of reception, in an attempt to look at this kind of comedy from different perspectives. Over the last few decades, taboo comedy has become a staple of television programming, thus raising issues concerning its functions and appropriateness, and making it an extremely relevant subject for those interested in how both humour and television work.

Chiara Bucaria is Associate Professor in English Language and Translation at the Department of Interpretation and Translation of the University of Bologna, Italy. Her main research interests include the translation of audiovisual products, censorship and textual manipulation, and dark humour. Chiara Bucaria was the recipient of the International Society for Humor Studies’ Emerging Scholar Award in 2006.

Luca Barra is Lecturer in Television and Media Studies at the Department of Arts of the University of Bologna, Italy. His research mainly focuses on television production and distribution cultures, comedy and humour TV genres, the international circulation of media products (and their national mediations), the history of Italian television, and the evolution of the contemporary media landscape."

“A much-needed book on the deeper meanings of comedy’s darker side. Treat yourself to some death, faeces, racism, and Oedipal desire, and to the contributors’ compelling, insightful interpretations of how and why they work on television.” (Jonathan Gray, author of “Watching with The Simpsons: Television, Parody, and Intertextuality”)

“Taboo humor, often offensive, challenging, dismissive, ridiculing, mean-spirited, and threatening, is anathema to television’s central principles of social inclusion and acceptability. This brilliant collection of essays provides a much needed exploration and explanation for why TV now includes the once forbidden form of comedy. Taboo humor is not for everyone, but this volume very much is for those seeking to understand the current landscape of television, comedy, and quite often, politics.” (Jeffrey P. Jones, director, The Peabody Awards and author of “Entertaining Politics: Satiric Television and Political Engagement”)

“Whether new or old, taboos attract humour that risks offence, especially on television -- should censorship prevail? This insightful book strips away simplistic ideas about how television humour tackles forbidden subjects using nuanced and carefully researched case studies.  An indispensable resource-book for the student of television and humour, its strength derives from contributions by a wide range of authoritative and interesting scholars.” (Jessica Milner Davis, author of “Farce”)