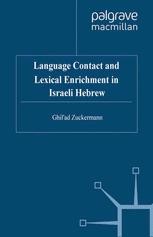 Israeli Hebrew is a spoken language, 'reinvented' over the last century. It has responded to the new social and technological demands of globalization with a vigorously developing multisourced lexicon, enriched by foreign language contact. In this detailed and rigorous study, the author provides a principled classification of neologisms, their semantic fields and the roles of source languages, along with a sociolinguistic study of the attitudes of 'purists' and ordinary native speakers in the tension between linguistic creativity and the preservation of a distinct language identity.

GHIL'AD ZUCKERMANN is Gulbenkian Research Fellow at Churchill College, Cambridge. He teaches and supervises at the Faculty of Oriental Studies and is affiliated with the Department of Linguistics. He has published in English, Israeli, Italian, Yiddish, Spanish and Russian, has taught in Singapore, the USA and Israel and conducted research in Japan and Australia.

'...this is the first time that anyone has drawn attention to the extent to which 'phono-semantic matching' applies in word formation...a most important contribution to the study of Israeli Hebrew word formation in particular and of language change in general.' - Shmuel Bolozky, Professor of Hebrew, University of Massachusetts

'This book will interest not only researchers and graduate students in the topic but also Hebraists. Moreover, any layman who loves words will find it absorbing and entertaining... it is both scholarly and original [and] an outstanding contribution to the science of etymology.' - Professor Geoffrey Lewis, St Antony's College, Oxford

'..fascinating and multifaceted... a paean to linguistic creativity. It is especially timely in the present historical context of rapid globalization and linguistic inter-influence.' - Professor James A. Matisoff, Department of Linguistics, University of California, Berkeley

'The volume is extremely impressive. Zuckermann demonstrates a mastery of European and Hebrew lexicography... In addition to developing a rigorous analytical framework, he offers many detailed word (and compound) histories and carves out a well-defined position on issues of much significance.' - Professor Jeffrey Heath, University of Michigan

'The book is an outstanding piece of scholarship which undoubtedly represents a milestone in the field of lexicology. Zuckermann's attention to details has made the work a mini-encyclopaedia, much in the tradition of Jewish scholarship. Generally, his etymologies are well thought out and set a standard for current and future research.' - Joseph T. Farquharson, Linguistlist