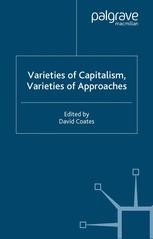 Though the emerging sub-discipline of comparative political economy is now rich in studies of different advanced capitalisms, it still lacks a systematic consideration of the organizing frameworks and methodologies underpinning those studies. This definitive volume outlines the two great debates currently shaping the analysis of advanced capitalism. It makes the case for a greater awareness of underlying theoretical issues in the design of empirical research, and demonstrates the value of exploring the interconnections between competing intellectual approaches.

'For more than two decades, the principal approaches to comparative political economy have largely talked past each other, operating within sealed theoretical paradigms. This indispensable volume is the first to bring the alternative approaches together in critical engagement. The result is both a fascinating exploration of how to analyse contemporary capitalism, and a fresh and important account of the dynamics and trajectories of capitalist development.' - Chris Howell, Professor of Politics, Oberlin College