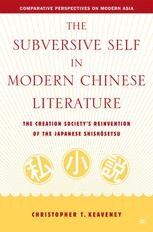 The Subversive Self in Modern Chinese Literature

The Creation Society’s Reinvention of the Japanese Shishôsetsu

An examination of whether Chinese writers of the Creation Society, a Chinese literary coterie, successfully appropriated shishosetsu, a quintessentially Japanese form of autobiographical narrative, into a form to be exploited for their own ends, especially political ends.

Christopher T. Keaveney is a Professor of Japanese and Asian Studies and co-chair of the Department of Modern Languages at Linfield College, USA.

"Chris Keaveney's new book marks an important achievement in the development of modern Sino-Japanese studies. By examining the impact of a literary form first developed in Japan on a community of innovative writers in China of the 1920s, he takes a long way toward understanding the profound cultural interaction between Chinese and Japanese writers early in the last century. It is one thing to assert such a linkage, but Keaveney's accomplishment is actually to demonstrate it in such rich and fine colors. Both sides of the equation are now much better understood. " - Joshua A. Fogel, University of California, Santa Barbara

"Although many have recognized the importance of study in Japan and of the modern Japanese fiction they read there on shaping the literary imaginations of China's first generation of modern writers, The Subversive Self is the first study in English to explore the depth and the contours of this influence. This book is a very significant and highly welcome contribution to the comparative study of modern East Asian literatures. It richly deserves the attention of scholars of both China and Japan, of Asian literatures, and of Comparatists in general." - Robert E. Hegel, Washington University

"The May Fourth coterie of writers marks what is arguably the most disjunctive redirection in the long meandering flow of the Chinese literary narrative. Chris Keaveney, with nuance and imagination, measures the transformative pressure of identifiable Japanese cultural currents on what is to become a wholesale revolution in the Chinese language and its literary forms, and ironically, on the self- representation of the fervent patriots who would contest the Chinese

identity in order to save it." - Roger T. Ames, University of Hawai'i"Among studies in English on the Creation Society or modern Chinese literary romanticism, this is the first book that relatively advanced students should be advised to read - including upper-division undergraduates who have already read one of the major overall literary histories in the field." - Philip F. Williams, Massey University