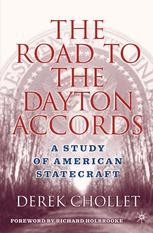 The Road to the Dayton Accords

A Study of American Statecraft

The intricate diplomacy that led to the peace agreement in Bosnia, known as the Dayton Accords, is here revealed in unprecedented detail. Based on thousands of still-classified government documents and dozens of interviews with key participants, this is a comprehensive story of high-level diplomacy, told from the inside.

DEREK CHOLLET most recently served as Foreign Policy Adviser to U.S. Senator John Edwards. During the Clinton Administration, he served as an adviser to UN Ambassador Richard Holbrooke and Deputy Secretary of State Strobe Talbott.

'This vivid, absorbing account brings you deep inside the truculent negotiations that brought an imperfect peace to the Bosnia War in 1995. Among its many lessons for today is how indispensable the United States is to the resolution of the world's most difficult crises.' - Warren Christopher, former U.S. Secretary of State

'In this fast-paced narrative, Derek Chollet brings an historian's skill and an insider's eye to a complex and consequential story - the American-led diplomacy backed by force that ended the worst outbreak of genocide in Europe since the Holocaust. An essential source for students and practitioners of statecraft - and for citizens who want to understand one of the defining episodes of the post-cold war era.' - Strobe Talbott, President, Brookings Institution, and former U.S. Deputy Secretary of State

'The tortuous path that led first through humiliation and failure in Bosnia and ultimately to triumph with the Dayton Peace Accords is one of the great dramas of Bill Clinton's presidency. No historian better understands this fascinating episode more than Derek Chollet, whose narrative benefits at every turn from his unparalleled access to the key players on the American side. Chollet tells a gripping story about the agony of choice, as U.S. policymakers faced a humanitarian and diplomatic disaster in the Balkans but recoiled from the political and military costs of acting to halt it. In the end, Bill Clinton and his team did act and this is the story of that bold decision. This book is indispensable reading for anyone who wants to understand Clinton's foreign policy.' - John F. Harris, author of The Survivor: Bill Clinton in the White House, and National Politics Editor, The Washington Post

'Derek Chollet takes us through the Bosnian problem from hell with all its agonies and failures, to the other side - the rare foreign policy triumph. With his unique perspective and insight, he explains how American power can be well used to actually solve problems.' - Leslie H. Gelb, President Emeritus, Council on Foreign Relations

"Almost no one understands how, when, and why the US ended up intervening in Bosnia after years of resisting. In a major achievement, Chollet's book finally unravells the processes and thinking involved. It is not a pretty story, but it is an instructive one for both scholars and members of the concerned public."