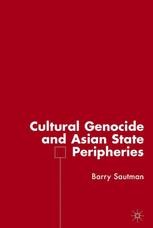 This volume engages the concept and related notions of cultural hegemony, cultural erosion, cultural hybridity and cultural survival by considering whether five regimes in Asia deploy policies aimed at extirpating the language, religion, arts, customs or other elements of the cultures of non-dominant peoples.

BARRY SAUTMAN is Associate Professor of social science at the Hong Kong University of Science and Technology.

"The contributors to Cultural Genocide and Asian State Peripheries have produced a thoughtful and insightful look at the situation of a selected few ethnic minorities in five East Asian nations. They take us from the late colonial period through the post World War II era, and through revolutions to the present. Along the way, the authorsadroitly describe the nexus between these minority peoples and the ethnic majorities they live amongst. Issues of assimilation, cultural genocide, preservation of culture, ethnic nationalism and a host of others are clearly and intelligently discussed while being richly documented. An important and compelling contribution to the studies of nationalism and ethnicity." - A. Tom Grunfeld, SUNY Distinguished Teaching Professor, Empire State College/SUNY"Cultural genocide cannot easily become an analytical term. Not because such acts of violence do not happen. But because ordinary language and conventional tools of crime and punishment fail us. In these engaging portraits of violence against the cultures of five Asian minorities, the authors do not blame official intentions alone. The arrogance of power, extreme callousness, and ideas about civilizational superiority and inferiority are all at work. But there is no mistaking the victim. The authors recognize the uses and abuses of the term, yet they manage to keep their sights focused on the victims of cultural genocide."

- Sanjib Baruah, author of India Against Itself (1999)and Durable Disorder: Understanding the Politics of Northeast India (2005)'Given the controversy surrounding 'cultural genocide' in several Asian states, this book will inevitably spark reaction. The editor delves deeply into just what 'cultural genocide' means and how it can be applied to various concrete situations. Most striking is Barry Sautman's declaration that China is not guilty of cultural genocide in Tibet. In meticulous detail he documents the processes of cultural change in religion, the arts, language, migration and various other aspects, and attributes change mainly to Westernized modernity. This book is a courageous and long overdue study of a highly emotional and extremely important topic.'