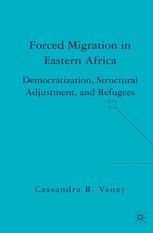 This study enriches understanding of East Africa's refugee situation by examining the conditions that gave rise to it and how the refugees themselves sought to reconstruct their lives. Focusing on the 1990s, Veney compares Kenya and Tanzania, two nations that did not generate many refugees, but become important hosts for the general region.

"In this admirably written book, Cassandra Veney demonstrates that migration should not be analyzed in isolation but as part of a wider discourse on the related phenomena of internal conflict, war, failed states, externally imposed development agendas, and shifting gender and power relations within refugee and host communities. Veney skillfully weaves her way through a narrative framed within the political and cultural struggles underpinning the refugee condition in Eastern Africa, while unraveling the connections between local, national and international policy responses to this continuing crisis. This well researched and deeply contextualized book is a major contribution to understanding the politics and practice of refugee policy in two leading refugee host countries - Kenya and Tanzania - in one of the most disturbed regions of Africa. It deserves to be read by all refugee and migration scholars, practitioners and policymakers with a serious interest in the African refugee problem."

- Tiyanjana Maluwa, Pennsylvania State University Dickinson School of Law"This unique comparative study of refugees in Kenya and Tanzania, 1990-2003, focuses on refugees and a wide range of related issues, such as responses by the host countries. A product of field research in refugee camps (1993 in Kenya, 1998 in Tanzania) as well as extensive use of reference sources, especially the United Nations high Commissioner for Refugees (UNHCR), the report reflects careful consideration of the refugees and the human rights problems they coped with over an extended period of time. Veney is equally sensitive to the economic and political effects on the host countries, particularly as labor and business politics produced various local consequences regarding water supplies and services, resulting in different outcomes in each country... The scholarship is reflected in an extensive bibliography, informative footnotes, and index... Highly recommended." - CHOICE