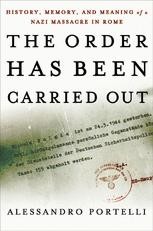 The Order Has Been Carried Out

History, Memory, and Meaning of a Nazi Massacre in Rome

On March 24, 1944, Nazi occupation forces in Rome killed 335 unarmed civilians in retaliation for a partisan attack the day before. Portelli has crafted an eloquent, multi-voiced oral history of the massacre, of its background and its aftermath. The moving stories of the victims, the women and children who survived and carried on, the partisans who fought the Nazis, and the common people who lived through the tragedies of the war together paint a many-hued portrait of one of the world's most richly historical cities. The Order Has Been Carried Out powerfully relates the struggles for freedom under Fascism and Nazism, the battles for memory in post-war democracy, and the meanings of death and grief in modern society.

Alessandro Portelli is Professor of American Literature at the University of Rome-La Sapienza. He is the author of The Death of Luigi Trastulli: Form and Meaning in Oral History; The Text and the Voice: Speaking, Writing, and Democracy in American Literature; The Battle of Valle Giulia: Oral History and the Art of Dialogue; and The Order Has Already Been Carried Out: History, Memory and Meaning of a Nazi Massacre in Rome.

"An extremely readable book. Portelli's work is to be valued not only for the light it casts on an important moment in the history of the Italian Resistance, but also for what it has to say about the history of the working classes in Rome." - Journal of Modern Italian Studies"Alessandro Portelli's The Order Has Been Carried Out is a major work by a scholar who has already helped to form the field of oral history. It is an intricate and compelling account of one of the central events of the German occupation of Rome during World War II, a partisan attack followed by a retaliatory Nazi massacre. Portelli manages to show how an historic event which is supposedly very well-known has in fact been largely hidden under layers of mystification during its constant telling and retelling." - Alexander Stille, author of Future of the Past

"Alessandro Portelli, one of the most creative interpreters of oral testimony, explores again the complex intersection of memory, history, consciousness, and ideology, this time in the context of a Nazi massacre in the city of Rome in 1944. What is so startling about the work is the subtle and respectful manner in which the voices of those for whom the memory remains a deep personal scar is interwoven with those for whom the events are simply history. Only someone with the talents of Portelli could weave this kind of textured narrative that highlights the dual nature of the interviewing experience and the ways in which such testimony acts as a text within the continuing discourse about the human condition."

"This is a remarkable and innovative exploration at the intersection of

profound issues in theory and practice of history-making while letting

participants speak their own minds. We join his subjects in reflecting on

place, when the causes for which they died fade from memory into history."

"In contrast to his well-known volumes of collected essays, Alessandro Portelli's The Order Has Been Carried Out is a sustained book-length history-yet one that draws on and extends the qualities that have earned his earlier work international acclaim. Analytically, meditatively, passionately, and poetically, Portelli explores and documents, as fact and as memory, an episode critical to the history of Italy and World War II and to the postwar world right down to the present. Offering a movingly contemporary meditation on war, death, violence, and political struggle, The Order Has Been Carried Out reminds us that oral history matters because it demonstrates how the past and present necessarily, if not comfortably, live together within all of us."

In this, his masterpiece, Alessandro Portelli restores memory, and with it

oral history, to its proper role in reconstructing the meaning of historical events. Through the telling of a Nazi massacre in Rome during World War II, we have been given a universal story that will permanently change our way of thinking about our past and ourselves -as witnesses and actors in a world increasingly plagued by what Portelli calls the "symmetry" of violence and retribution.