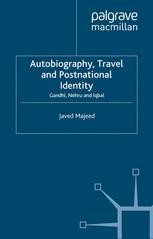 This book examines concepts of travel in the autobiographies of leading Indian nationalists in order to show how nationalism is grounded in notions of individual selfhood, and how the writing of autobiography, fused with the genre of the travelogue, played a key role in formulating the complex tie between interiority and nationality in South Asia.

JAVED MAJEED is Professor of English and Comparative Literature at King's College, London. His previous publications include Ungoverned Imaginings: James Mill's 'The History of British India' and Orientalism (1992) and with Christopher Shackle Hali's Musaddas: the Flow and Ebb of Islam (1997).

'[A] unique and very important book. Its uniqueness derives from the fact that it combines three vital fields, each of great contemporary relevance, but seldom if ever put together. The first is life writing, the second travel writing, the third postcolonial studies. To bring them into one coherent argument is itself a brilliant stroke. Majeed has not only had this singular idea, but he has also carried out convincingly, and with considerable élan. Throughout the book is a riveting read. It is fluent as well as being learned, subtle without being unnecessarily abstruse...The postgraduate will find it absorbing, while the advanced undergraduate will discover in it much that is of worth. The researcher will simply revel. Compared to this, all other studies in the field are bicycle rickshaws. This is a Stretch Limousine.' - Dr Robert Fraser, Fellow of the Royal Asiatic Society, Senior Research Fellow, The Open University.

'This excellent book will register an immediate impact in the fields of literary studies and history, but it will also appeal to a wider range of disciplines that are now concerned with topics such as the person, self-hood and the structure of narrative.' - Professor Christopher Bayly, University of Cambridge

'Javed Majeed has produced an exceptional and important book which will affect our way of thinking about nationalism today. Through the most scrupulous and sensitive readings of the autobiographical writings of Ghandi, Nehru and Iqbal, he demonstrates how each of them are engaged in a complex negotiation of the innermost depths of selfhood as a means of political self-empowerment. They do this against the oppressive clichés of colonial discourse, but also in such a way as to forge a new, subtly rendered, version of political subjectivity which could serve as a model for post-colonial identity in modern times. Majeed opens up these key figures of Indian nationalism to the widest political significance. In the process, notably in his discussion of Iqbal, he also despatches a number of dangerously oversimplified readings of modern Islamic thought. Autobiography, Travel and Post-Colonial Identity is an impressive achievement which will stand as a major rebuttal of those who would separate the vagaries of the internal world from the drama of political liberation.' - Professor Jacqueline Rose, Queen Mary, University of London

'Autobiography, Travel and Postnational Identity: Gandhi, Nehru and Iqbal represents an important and valuable contribution to the fields of nationalism, travel and autobiography, which will be welcomed by researchers and students from a multiplicity of disciplines including literary studies, history, geography, politics, philosophy, postcolonial and cultural studies. As such, I have no hesitation in recommending this excellent monograph for the readers of this journal to feast upon.' - Shompa Lahiri, National Identities

'Majeed's textual readings are always carefully argued, and frequently genuinely insightful. Autobiography, Travel and Postnational Identity is exemplary both in its placing of autobiographical texts within a historical and literary context, and in its ability to make connections between that context and larger issues of concern in postcolonial, travel, and auto/biography studies.' - Philip Holden, Biography

'Javed Majeed's third book is a fascinating read, characterized by an engaging and lucid style, intelligent insights and superb textual analysis. This is a scholarly, exciting, and wide-ranging book that contributes to a number of different fields'. Neelam Srivastava, Interventions