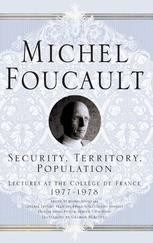 This book derives from Foucault's lectures at the College de France between January and April 1978, which can be seen as a radical turning point in his thought. Focusing on 'bio-power', he studies the foundations of this new technology of power over population and explores the technologies of security and the history of 'governmentality'.

Author Michel Foucault: Michel Foucault, acknowledged as the pre-eminent philosopher of France in the 1970s and 1980s, continues to have enormous impact throughout the world in many disciplines.

'These lectures offer the wonderful opportunity of witnessing a great mind at work. In answering the question of whether the general economy of power in our societies is becoming a domain of security Foucault is never less than erudite, insightful and challenging. Here, probably better than anywhere else, we see the nature of his thoughts on the rationality of modern government'. - Jeremy Jennings, Department of Politics, Queen Mary, University of London, and editor of The European Journal of Political Theory

'Security, Territory and Population is a stunning display of Foucault's skills of historical research and theoretical insight. Exploring the emergence of 'bio-power'and the 'techniques of security' designed to shape and regulate populations from a distance, Foucault looks beyond disciplinary power to a distinctively modern form of government through freedom. Accessible and highly readable, these lectures have much to tell us about our contemporary situation.' - James Martin, Department of Politics, Goldsmiths, University of London

'The English translation of Security, Territory and Population is a major event not only for Anglophone readers of Foucault's work, but for all those concerned with understanding our present social and political condition. These lectures show that the trenchant analysis of biopower, power over life, which Foucault had begun in the first volume of the History of Sexuality and which he pursues here in terms of technologies of security, led him to a decisively deeper and more radical formulation of his guiding problematic-what he called the government of the self and others-the issue that would serve as the basis for all his subsequent work. Security, Territory and Population might thus properly be called the 'missing link' that reveals the underlying unity of Foucault's later thought. It offers a new set of tools and analyses for all those who would seek to take up its line of flight. Burchell's translation is meticulous, supple, and attentive to the nuances of Foucault's fluid lecture style. We all stand in his debt.' - Kevin Thompson, Book Review Editor, Continental Philosophy Review, Department of Philosophy, DePaul University

'Security, Territory, Population therefore provides an indispensable resource for those who are already working on the history of governmentality as well as a useful point of reference for those who are familiar with Foucault's work but wish to gain additional insight into some of his most productive lines of historical inquiry.' - Nick Butler, Ephemera, Theory& Politics in Organization

'...much care has gone into the editing and presentation of the work, with great respect paid for the original oral delivery balanced by the addition of scholarly notes and references, occasional supplementary material provided from the written course manuscripts, as well as a helpful essay by the editor on the context of the course.' - Matthew Chrulew, Limina (A Journal of Historical and Cultural Studies)