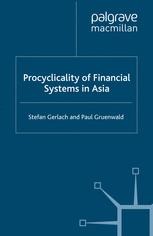 Procyclicality of Financial Systems in Asia

Procyclicality of the financial system is a feature of any normally functioning economy. However, procyclicality can sometimes become 'excessive' leading to undesired effects on the real economy. The challenge that this volume addresses is to define 'excessive' and to identify policy actions that could produce superior outcomes.