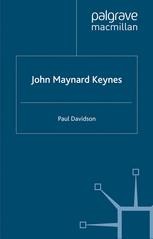 This book looks at the life of Keynes leading up to the writing of his seminal General Theory , examines the General Theory in detail, and explores how it differs from classical theory. The impact of Keynes's work on the economy postwar and up to the present day is also assessed.

'This could be the best one-volume treatment of Keynes's economics since Keynes himself. Clear, logical and faithful, Paul Davidson introduces the real Keynes to a new generation. And do we ever need him.' - James K. Galbraith, The University of Texas at Austin and Levy Economic Institute

'Global imbalances, the unshackling of capital, the precarious state of modern capitalism: rarely has the world of economics been in more need of the thoughts of John Maynard Keynes. Although Keynes is no longer with us, this book is the next best thing. Paul Davidson is the leading expert on Keynes and Keynesianism and his book should be read by anybody who wants to understand the world as it is, rather than as the economic text books say it ought to be.' - Larry Elliott, Economics Editor, The Guardian

'Paul Davidson's fascinating, encyclopaedic book captures the drama of the appearance of the General Theory, illuminates the controversies still surrounding it, and passionately defends Keynes's radical innovations in economic theory and policy. It is high time for economists and policymakers to go back to Keynes's own words, whose power Davidson so effectively articulates.' - Peter L. Bernstein, President of Peter L. Bernstein, Inc., and author of Against the Gods: The Remarkable Story of Risk and Capital Ideas Evolving

'The publication of the first installments in Palgrave Macmillan's new series, "Great Thinkers in Economics," should be a major event for historians of economics.' - Roger Blackhouse, University of Birmingham