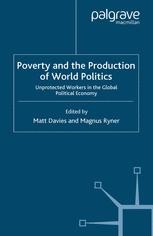 Poverty and the Production of World Politics

This book revisits Cox and Harrod's conception of 'unprotected workers' through theoretical reflection and empirical explorations of the rise of millennialism, prostitution and the sex industry, the politics of migration, the interstices of class and gender, and trade union politics.

'No single volume provides as comprehensive an analysis of the production of the global poor in the world economy. The book is a milestone in making visible the many 'faces' of the largely invisible unprotected workers. It is a much needed analysis and a timely challenge to much of the conventional wisdom on poverty and world politics. Excellent case studies, a great book.' - Brigitte Young, Professor of International and Comparative Political Economy, University of Münster, Germany

'This book is a 'must read' for anyone concerned with the political economy of poverty in world politics. The volume retrieves neglected, but critically important, concepts of production and power, and adopts them in a theoretically sophisticated way to the analysis of contemporary developments.' - Craig Murphy, M. Margaret Ball Professor of International Relations, Wellesley College, USA; Official Historian of the United Nations Development Programme (UNDP)& Ex-President of the International Studies Association (ISA)

'Poverty and the Production of World Politics is a path-breaking book on the nexus between work and political subjectivity. It is likely to influence not only critical thinking on the 'global poor' in International Political Economy, but how we radically rethink the mutual constitution of politics and production under changing and transformed conditions of exclusion and vulnerability on a world scale. This is an exemplary volume of innovative theorising and historically-grounded scholarship.' - Professor Mustapha Kamal Pasha, Chair in International Relations, University of Aberdeen, UK

'This marvellous collection of essays re-introduces and reflects on the approach first developed by Robert Cox and Jeffrey Harrod in their pathbreaking, but too often neglected, writings of the 1970s and '80s. Emphasizing the dialectic of power and relations of production, the contributors study the global poor as unprotected workers, thus laying the foundations for a sound critique 'from below' of the contemporary world order.' - Marcel van der Linden, Professor of Social Movement History & Research Director of the International Institute of Social History, Amsterdam, The Netherlands