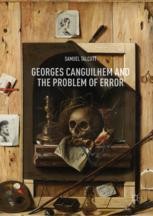 Georges Canguilhem and the Problem of Error

Examining Georges Canguilhem’s enduring attention to the problem of error, from his early writings to Michel Foucault’s first major responses to his work, this pathbreaking book shows that the historian of science was also a centrally important philosopher in postwar France. Samuel Talcott elucidates Canguilhem’s contributions by drawing on previously neglected publications and archival sources to trace the continuity of commitment that led him to alter his early anti-vitalist, pacifist positions in the face of political catastrophe and concrete human problems. Talcott shows how Canguilhem critically appropriated the philosophical work of Alain, Bergson, Bachelard, and many others while developing his own distinct writings on medicine, experimentation, and scientific concepts in an ethical and political endeavor to resist alienation and injustice. And, while suggesting Canguilhem’s sometimes surprising philosophical importance for a range of younger thinkers, the book demonstrates Foucault’s own critical allegiance to Canguilhem’s spirit, techniques, and investigations.

Samuel R. Talcott is Associate Professor of Philosophy at University of the Sciences in Philadelphia, USA.

“Samuel Talcott’s work … proposes a somewhat more speculative interpretation by following the way in which the concept of error unfolds and progressively colonizes Canguilhem’s entire intellectual production. … merit of Samuel Talcott’s book is not only related to the effort to provide a systematic reading but also to the fact that it retraces the manner in which the problem of error is articulated in the early works of Canguilhem, which are not so well known to the general public.” (‪Codrin Tăut, Foucault Studies, Issue 30, June, 2021)

“Fascinating, original and important, this study provides a sorely needed intellectual history of Georges Canguilhem's thought. Taking the reader on a journey to understand Canguilhem's intellectual development, political activism, medical view, and attitude to science, this book is a significant contribution to history and philosophy of medicine and science.” (Havi Carel, Professor of Philosophy, University of Bristol, UK)

“Despite Foucault's effusive celebration of it, Georges Canguilhem has yet to have the impact that his startling and innovative work merits. The fruit of years of meticulous and creative research and analysis, Samuel Talcott's book is likely the definitive English language study of Canguilhem for our generation. This marvelous and captivating work brings the entire arc of his thinking to life.” (Jason M. Wirth, Seattle University, author of Nietzsche and Other Buddhas: Philosophy after Comparative Philosophy)

“In the Anglophone world, Canguilhem’s work has mainly been studied looking back from Foucault. Georges Canguilhem and the Problem of Error, however, presents Canguilhem’s thought on its own, and in all of its complexity. Talcott’s book is essential reading for anyone interested in the philosophy of biology and in the development of 20th century French philosophy.” (Leonard Lawlor, Sparks Professor of Philosophy, Penn State University)

“Samuel Talcott’s study of Canguilhem’s thought is a groundbreaking study of the entire breadth of this titan of French post-war intellectual life that will set the benchmark for all future research into this rich source for thinking about science, power, norms, the art of medicine, and the role of rationality in our contemporary world. Deftly making use of published and newly available archival materials, Talcott demonstrates the profound ways in which Canguilhem’s line of thought was always driven by a core set of ethical and political concerns.” (Kevin Thompson, Associate Professor of Philosophy, DePaul University, co-editor of Intolerable: Writings from Michel Foucault and the Prisons Information Group)

“This book, dedicated to one of the last century’s most original and influential thinkers, is the first in-depth analysis presented to English readers. The discussion of Canguilhem’s intellectual itinerary and impact, using some rare documents, is exemplary. Samuel Talcott brilliantly undermines our usual conception of error!” (Alain Beaulieu, Laurentian University, Canada)

“In this important book, philosopher Samuel Talcott lucidly tracks the political, physiological, and epistemological ramifications of the notion of error in Georges Canguilhem’s writings through to the 1960s. Canguilhem’s philosophy emerges as a creative, principled confrontation with history and thought— from fascism to Algerian independence, from Bernard and Bergson to Sartre and Foucault. Clear, engaging, and essential for understanding Canguilhem’s vital contributions to the history and philosophy of biology, environments, medicine, technology, and life.” (John Tresch, Warburg Institute, University of London, author of The Romantic Machine: Utopian Science and Technology after Napoleon)

“Samuel Talcott’s book on Canguilhem provides a rich tapestry for understanding the intersection of medicine and politics. He masterfully shows how Canguilhem’s views on colonialism intertwine with his key philosophical insight on error in life. In addition to his contribution on Canguilhem scholarship, Talcott shows how Canguilhem influenced Foucault’s political analysis of medical fields.” (Sokthan Yeng, Associate Professor of Philosophy, Adelphi University, USA)