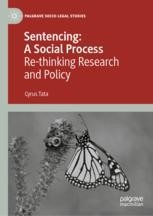 This book asks how we should make sense of sentencing when, despite huge efforts world-wide to analyse, critique and reform it, it remains an enigma.Sentencing: A Social Process reveals how both research and policy-thinking about sentencing are confined by a paradigm that presumes autonomous individualism, projecting an artificial image of sentencing practices and policy potential. By conceiving of sentencing instead as a social process, the book advances new policy and research agendas.  Sentencing: A Social Process proposes innovative solutions to classic conundrums, including: rules versus discretion; aggravating versus mitigating factors; individualisation versus consistency; punishment versus rehabilitation; efficient technologies versus the quality of justice; and ways of reducing imprisonment.

“Tata’s book is persuasively and beautifully written. It is clear and well structured, and both informative and challenging. It is an inspiring piece of work, and ought to be read and enjoyed both by academics and by reflective sentencing professionals from the legal and therapeutic professions.” (Ester Blay, Journal of Law and Society. Vol. 48 (1), March, 2021)

“An invitation to rethink existing orthodoxies and to broaden the scope of academic writing and thinking about the nature of sentencing. … it is eminently approachable, and deserves to be widely read.” (David Hayes, Punishment & Society, August 26, 2020)

“Every once in a while, a work appears that mounts a robust challenge to some of our most fundamental assumptions about sentencing. Cyrus Tata’s new book, Sentencing: A Social Process. Re-thinking Research and Policy … is one such work.” (Tom O'Malley, sentencingcrimeandjustice.wordpress.com, July 26, 2020)

“Tata, in this eminently readable book, notes the limitations of current academic discourse around sentencing. … serves a functional role in maintaining the mystique of sentencing.” (Maggie Hall, International Journal for Crime, Justice and Social Democracy, Vol. 9 (3), 2020)

“Sentencing: A Social Process offers a highly original and constructive re-thinking of policy and research. It enriches and enlivens a debate that is too often polarized and unproductive.” (Susan Bandes, Centennial Distinguished Professor, De Paul Law School, USA)

“Breaks the chains of moral individualism that bind our understanding of sentencing and our attempts to reform it.” (Fergus McNeill, Professor of Criminology & Social Work, Glasgow University, UK)

“Cyrus Tata is a pioneering thinker in sentencing research and this book convincingly develops his position against depictions of sentencing as individualistic actions by autonomous judges.” (Kristel Beyens, Professor of Criminology and Penology, Vrije Universiteit Brussel, Belgium)

“Tata shows in a brilliant way how our impatience to realise change, obstructs our capacity to observe how sentencing processes really work.” (Miranda Boone, Professor of Criminology, Leiden University, Netherlands)