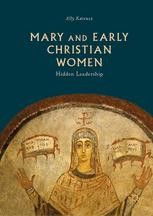 This book is open access under a CC BY-NC-ND license.

This book reveals exciting early Christian evidence that Mary was remembered as a powerful role model for women leaders—women apostles, baptizers, and presiders at the ritual meal.  Early Christian art portrays Mary and other women clergy serving as deacon, presbyter/priest, and bishop. In addition, the two oldest surviving artifacts to depict people at an altar table inside a real church depict women and men in a gender-parallel liturgy inside two of the most important churches in Christendom—Old Saint Peter’s Basilica in Rome and the second Hagia Sophia in Constantinople. Dr. Kateusz’s research brings to light centuries of censorship, both ancient and modern, and debunks the modern imagination that from the beginning only men were apostles and clergy.
Show all
About the authors

Dr. Ally Kateusz is Research Associate at the Wijngaards Institute of Catholic Research in London. She is a cultural historian whose work focuses on religion and gender. Her research has been published in the Journal of Early Christian Studies, the Journal of Feminist Studies in Religion, as well as other venues, and has won prestigious awards.

“This book will inspire Christian scholars, ministers, and congregations to rethink their perspectives on gender roles in Christianity. … this book will assist in breaking the prevalent misperception that early church women leaders were rare. It will challenge readers to fully acknowledge that women have been integrally present throughout Christian history.” (JungJa Joy Yu, Reading Religion, readingreligion.org, April 27, 2021)

“Ally Kateusz presents a multidisciplinary analysis of literary texts, church art, and church … . She supports her literary and iconographic claims with official church commissions, directives, and commentaries, sometimes made by popes. …. For scholars, the book is a treasure trove, with thirty-nine pages of references and fifty pages of notes. … Mary and Early Christian Women: Hidden Leadership is a stimulating read and the author’s perspective on imagination and Christian history will make you think. Highly recommended.” (Elizabeth Ursic, Cross-Currents, Vol. 71 (1), March, 2021)

“Mary and Early Christian Women would certainly interest readers who are invested in women’s roles in churches and especially readers invested in Catholicism. … The artwork included in this book is stunning, and the images portray Mary and other women in significant liturgical roles. Overall, Mary and Early Christian Women is a significant contribution to the field for its attention to extracanonical texts, artistic analysis, and its accessibility.” (Christy Cobb, RBL, Review of Biblical Literature, Issue 12, 2020)

“Using numerous tables of textual comparisons and illustrations, Ally Kateusz shows what rapidly becomes obvious.  Women did what men did: teaching, leading worship, baptising.  They were apostles, priests and bishops.  She concentrates on Mary the Mother of Jesus, and the evidence in texts and images for her as a leader, teacher and high priest in the early Church. The case is set out clearly and the evidence is meticulously presented.  This is a brilliant book, a landmark.”  (Margaret Barker, author of The Mother of the Lord: The Lady in the Temple)

“Mary and Early Christian Women draws back the veil on the earliest representations of the Virgin Mary and her sister saints in both narrative and visual art to reveal a tradition in which women served alongside men as prayer-leaders, preachers, and baptizers. Exemplary in its attention to detail, this book raises potentially shattering questions about the role of women in the early Church.” (Rachel Fulton Brown, author of Mary and the Art of Prayer: The Hours of the Virgin in Medieval Christian Life and Thought, Associate Professor of History, The University of Chicago)

“Mary and Early Christian Women provides a range of resources for re-thinking women’s roles and leadership in the third through tenth centuries of Christianity that surpasses anything we have seen.  Commanding and explaining dozens of visual images never seen together before, Ally Kateusz provides a depth, breadth, and technical detail that will need years to appreciate and understand fully.  This visual material, alongside some important texts, opens major paths to dramatically valorize women protagonists in the crucial eras after the first two centuries.” (Hal Taussig, Professor of New Testament (retired), Union Theological Seminary, USA)