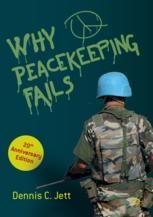 In this thoroughly revised edition of his bestselling 1999 volume Why Peacekeeping Fails, Dennis Jett explains why peacekeepers today are dying in record numbers while engaged in operations that either are bound to fail or make little contribution to peace. The original book compared a wide range of peacekeeping experiences, including the unsuccessful attempt at peacekeeping in Angola with the successful effort in Mozambique in the early 1990’s, to argue for the importance of peacekeeping and suggest ways to improve its chances for success. Nearly two decades later, the number of UN peacekeepers has risen to 100,000 from 15,000; and yet, after years of expansion, support for peacekeeping seems to be diminishing. This thoroughly revised and updated 20th anniversary edition—half of which is completely new material—provides a timely update to Jett’s previous volume, examining why the dramatic growth in peacekeeping has occurred, how it is now being used, and why the challenges peacekeepers face cannot be dealt with alone. Also considering the impact of terrorism on both recent and longstanding peacekeeping operations, this book will assess the prospects of peacekeeping in an era in which the United States seems to be withdrawing from the world.

Dennis C. Jett is a Professor and founding faculty member at the School of International Affairs at Pennsylvania State University, USA. A former career diplomat, he served 28 years in the State Department in a wide range of positions including as Ambassador to Peru and Mozambique and on the National Security Council. He is the author of four books published by Palgrave Macmillan: Why Peacekeeping Fails, Why American Foreign Policy Fails, American Ambassadors and most recently, The Iran Nuclear Deal.

“Brilliant. This book should be required reading at the UN Security Council and in other international organizations.” (Richard Butler, former Australian Ambassador to the UN)

“Why Peacekeeping Fails, which began to take shape in the first-hand experiences of an American ambassador who witnessed brutal conflicts in Africa, has grown into the classic account of the United Nations' ever-evolving global peacekeeping role over decades. Rich in institutional history, it  also never loses sight of the besieged people UN missions aim to save, often with mixed results.” (Barbara Crossette, a former New York Times UN bureau chief, is a contributing editor to PassBlue.com, an independent news site covering the UN)

“Dennis Jett has provided the expert or the student sharp analysis based on deep experience of a very difficult and complex, but necessary phenomenon, UN peace operations.” (Dan Simpson, ex-U.S. Ambassador to the Central African Republic, Somalia and the Democratic Republic of the Congo and Pittsburgh Post-Gazette columnist)

“In this lucid, compact volume, former Ambassador Dennis Jett illuminates the usually messy, problematic, and too often unsuccessful world of international peacekeeping. Through careful scholarship, Jett examines specific cases of mainly UN peacekeeping since 1948, and shows the structural and contextual reasons why peacekeeping at best has a spotty record. A critical book for those wanting to look beyond conventional wisdom at the politics of efforts to create and preserve international order through peacekeeping forces.” (Richard K. Scher, Professor Emeritus, Department of Political Science, University of Florida)

“Dr. Jett is one of very few political scientists who have excelled as both policymaker and academic analyst. This book provides a much-needed revision of his earlier, significant work, delving into cases in which Ambassador Jett was directly involved when he was a Foreign Service Officer (Mozambique and Angola) and analyzing additional cases that have emerged since its original publication.” (Dan Caldwell, Distinguished Professor of Political Science, Pepperdine University, USA)

“I have encountered peacekeeping operations throughout the Middle East. Most, like UNIFIL, were organized by the UN but the MFO was organized by the United States. Dennis Jett has produced a well-researched and very readable survey of peacekeeping operations around the world. This book, in my opinion, should have a place on the required reading list of any university course that focuses on peacekeeping, the UN and other international organizations or conflict management and prevention.” (David Dunford, Former Ambassador to the Sultanate of Oman, Adjunct Instructor at the School of Government and Public Policy, University of Arizona, USA)