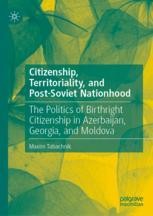 The Politics of Birthright Citizenship in Azerbaijan, Georgia, and Moldova

This book seeks to understand the politics of nationalism in the buffer zone between Russia and the West: Azerbaijan, Georgia, and Moldova, as well as Russia itself. It problematizes the official ways of defining the nation, and thus citizenship, in the light of “frozen” ethno-territorial conflicts and broader geopolitical discrepancies between Russia and the West. The author analyzes the politics of birthright citizenship policy in these countries and rejects the assumed connection between territorial nation-building and liberal democracy. The project will interest academics and graduate students in the fields of comparative and post-Soviet politics, nationalism, and citizenship, and international relations policy professionals.

“This fine book captures a moment in the identity negotiations of three lesser known communities of the former Soviet space: Azerbaijan, Georgia, and Moldova. Among other things, it shows the resilience of identity in the old developed cultures vis-a-vis its mutability in the recent artificially-created ones. It also underscores the error of regarding the development of identities in post-Soviet nations as a function of a natural inclination for liberal democracy. Full of fascinating data, the book should be of interest to every student of PSS.” (Liah Greenfeld, Professor, Sociology, Political Science, and Anthropology, Boston University, USA)“Maxim Tabachnik has revolutionised the study of citizenship and nationalism in general by reformulating the ‘ethnic’ (bad) ‘civic’ (good) distinction into one between ‘ethnic’ and ‘territorial.’ He has demonstrated convincingly, using the example of the post-Soviet states, that an ethnic/territorial distinction is much better able to account for differences in the outlooks and policies of these and other states than the traditional paradigm. The book also provides a fascinating study of the development of citizenship thinking throughout the ages.  In short, this is a book from which both regional specialists of the post-Soviet space and students of nationalism in general have much to learn.” (André Liebich, Honorary Professor of International History and Politics, Graduate Institute of International and Development Studies, Switzerland)

“This book makes important advances in the study of citizenship, nationalism, and national identity politics. Drawing on extensive primary research in and on Azerbaijan, Georgia and Moldova, the book offers rich empirical account of how and why elites in the post-Soviet region craft more or less inclusive citizenship rules. The author’s central argument that territorial and civic nationalism, while often used interchangeably, are in fact distinct concepts of collective identity both in their historical origin and in their impact on citizenship policy making in modern states will engage scholars of nationalism far beyond the post-Soviet region.” (Oxana Shevel, Associate Professor, Department of Political Science, Tufts University, USA)

“This book makes an important contribution to the scholarship of citizenship in post-Soviet states by exploring the origins of citizenship laws in Azerbaijan, Moldova and Georgia. This is an interesting book that highlights how ethnic identity, territorial nationalism, concerns of territorial integrity and geopolitics collide to define boundaries of citizenship in these countries. The book is rich with detail and relevant to contemporary events in the post-Soviet region. Sociologists, political scientists, historians studying nation-state-building in the contemporary era should read it.” (Shushanik Makaryan, Ph.D., Researcher, Population Research Institute, Pennsylvania State University, USA)