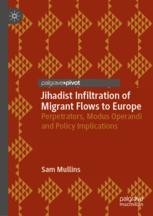 This book explores one of the most topical and controversial issues of recent years –jihadist terrorist infiltration of irregular migrant flows to Europe. Utilizing robust sampling criteria, more than a hundred such cases are identified and rigorously assessed. The analysis reveals the characteristics of offenders, their travel patterns and operational activities, and critically evaluates subsequent law enforcement and judicial responses. The author draws upon interviews with a range of European security officials, as well as non-governmental organization employees, and a recent refugee, in order to provide a series of practical recommendations.

Sam Mullins is Professor of Counter-Terrorism at the George C. Marshall European Center for Security Studies, Germany, and Honorary Principal Fellow at the University of Wollongong, Australia.

“Jihadist Iniltration of Migrant Flows to Europe is a very timely book that deals with a highly relevant question and demonstrates how one could approach such complex issues with a research design that combines quantitative and qualitative elements alike. It is however – as mentioned before – highly specialized literature, that will most likely be relevant first and foremost for practitioners and researchers dealing with the concrete topic.” (Paul Schliefsteiner, JIPSS Journal for Intelligence, Propaganda and Security Studies, Vol. 12 (2), 2018)

“This work by Sam Mullins is the most in-depth exploration of terrorism and violent radicalization within the flow of refugees to Europe in recent years. Using 144 individuals who either infiltrated Europe (often with the goal to attack) or who radicalized after they had arrived, Mullins provides an impressive and highly useful analysis for researchers and policy makers alike. It clears up myths surrounding immigration and terrorism, showing that only a tiny fraction of refugees actually radicalize and turn to violence. However, those who do need to be studied to assess and prevent future risks. Finally, Mullins also includes a full list of his case studies, which is a treasure trove for terrorism researchers.” (Daniel Köhler, Director, German Institute on Radicalization and De-Radicalization Studies (GIRDS), Germany)
“Sam Mullins delivers a must-read analysis of the complex threat involving migration and jihadist terrorism in Europe over the past decade. In addition to breaking down pertinent cases between 2011-2018, Mullins provides counterterrorism practitioners and policymakers with critical lessons learned and sobering predictions of the challenges ahead. Since migrant flows will undoubtedly continue to pose a challenge to Western countries in the years ahead, it is imperative we understand how to mitigate the threat moving forward. Mullins' book helps us do just that.” (LTC (Ret) Bryan Price, PhD, founding executive director of the Buccino Leadership Institute, Seton Hall University and former Director of the Combating Terrorism Center at West Point, USA)
“A remarkable study – timely, competent, and well-written, exploring the extent of jihadist infiltration of migration flows to Europe since 2011. Based on painstaking research, full of factual evidence, Prof. Mullins' book is neither down-playing nor exaggerating the size of the problem, with policy-recommendations that are practical and proportional – a must-read for counter-terrorist professionals as well as public opinion leaders.” (Alex P. Schmid, Editor-in-Chief of Perspectives on Terrorism and former Officer-in-Charge of the Terrorism Prevention Branch of UNODC)
“Sam Mullins’ book fills a critical gap in the terrorism literature by providing a comprehensive assessment of the threat posed by the jihadist infiltration of migrant flows to Europe. Sobering and data-driven, this research offers an empirical foundation for the policy implications of the nexus between terrorism and migration. Put simply, a must read for scholars, academics, and policy practitioners alike.” (Colin P. Clarke, Senior Research Fellow, The Soufan Center, USA)“This is the definitive treatment of the delicate and important topic of terrorist infiltration of migrant flows. Meticulous and level-headed, it injects badly needed data and insight into a public conversation until now shaped by fears, hopes, and guesswork.” (Thomas Hegghammer, Senior Research Fellow, Norwegian Defence Research Establishment (FFI), Norway, and Adjunct Professor, University of Oslo, Norway)