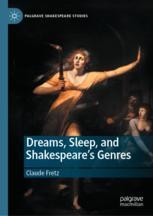 Claude Fretz is Research Fellow at Queen’s University Belfast, UK, and Associate Fellow of the research centre ‘European Dream-Cultures’ at Saarland University, Germany. He obtained his PhD from the Shakespeare Institute, University of Birmingham. He has published on Shakespeare, representations of dreams and sleep in early modern literature, and Restoration drama.

“The greatest strength of this study is the dialogue into which it enters with the Shakespearean texts. Certainly, Fretz speaks about the plays and their dreamscapes from a well-read historical perspective that allows him to illuminate the webs of meaning in which his primary texts are entangled. … its readers have gained a sense of the generic substance and significance of Shakespeare’s dreams, and of his sleepers, dreamers and insomniacs. And Caliban cries to dream again.” (Joachim Frenk, Shakespeare Jahrbuch, Vol. 156, 2020)

“A deft, rigorous and thrilling analysis of dreams and sleep in Shakespeare’s drama, informed by a unique interdisciplinary focus on dream theory, medical history, classical theatre, medieval literature, early modern dramatic traditions, anthropological enquiry, folklore and genre studies. This book is a veritable cabinet of wonders which opens up early modern cultures of dreaming in new and exciting ways, enriched by Fretz’s exploration of the manner in which Shakespeare sometimes subtly, sometimes radically, reframes dream motifs in order to challenge generic conventions and test the limits of dramatic possibility. This marvellous study both refreshes and redefines its field.” (Chris Laoutaris, Lecturer at the University of Birmingham’s Shakespeare Institute, Stratford-upon-Avon, UK, and author of Shakespeare and the Countess: The Battle that Gave Birth to the Globe)

“This thoughtful and well-written book explores the deep connection between Shakespeare’s dramatic worlds and his use of images of dreams and sleep. It makes especially good use of the dream interpretation books of the sixteenth and early seventeenth centuries and connects Shakespeare’s work to much other Renaissance drama, including a fine discussion of John Lyly’s Endymion. Much of the value of the book is the way the author examines and analyzes the classical influences on Shakespeare’s work. Fretz’s knowledge of classical literature is remarkable.” (Carole Levin, Willa Cather Professor of History and Director of the Medieval and Renaissance Studies Program at the University of Nebraska-Lincoln, USA