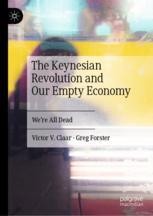 The Keynesian Revolution and Our Empty Economy

This book considers the cultural legacy of the Keynesian Revolution in economics. It assesses the impact of Keynes and Keynesian thinking upon economics and policy, as well as the response of the Chicago and Austrian schools, and the legacy of all three in shaping economic life. The book is a call to restore economics to its roots in moral and cultural knowledge, reminding us that human beings are more than consumers. The Keynesian Revolution taught us that we should be happy if we are prosperous, but instead we feel hollow and morally anxious – our economy feels empty. Drawing on paradigms from earlier historical periods while affirming modern market systems, this book encourages a return to a view of human beings as persons with the right and responsibility to discover, and do, the things in life that are intrinsically good and enduring. Because in the long run, the legacy of our choices will continue long after “we’re all dead.”

Victor V. Claar is BB&T Distinguished Professor of Free Enterprise at Florida Gulf Coast University, where he is an Associate Professor of Economics. He is the coauthor (with Robin Klay) of Economics in Christian Perspective. Prof. Claar also serves as an Affiliate Scholar in Economics at the Acton Institute.

Greg Forster is Director of the Oikonomia Network, a learning community for theological educators, and also serves as Visiting Assistant Professor of Faith and Culture at Trinity International University. He is the author of nine books and co-editor of four books. Dr. Forster is also a senior fellow with EdChoice.

“The Keynesian Revolution and Our Empty Economy is a significant text that deserves Engagement rather than summary. The principal arguments are persuasively developed and elegantly written … . Claar and Forster have written an excellent book. I have committed the sin of envy for which I repent. If you have not already read it, do so. It will be good for both your mind and soul.” (Brent Waters, Faith & Economics, Vol. 75, 2020)

“Every economist should read The Keynesian Revolution and Our Empty Economy. It asks major questions about our discipline … . At times the book almost reads like a novel: it tells a story, but a thorough and sensible one; a story that is well researched and thought out. … This is a great book, and I am thankful for the opportunity to read it and interact with it. Thanks to Professors Claar and Forster for providing us with this valuable resource.” (Todd P. Steen, Faith & Economics, Vol. 75, 2020)

“The Keynesian Revolution and Our Empty Economy is a thoughtful, carefully argued intellectual history of modernity and of the generally accepted analytical tools used to describe and critique it. … the book is well worth reading. It offers bold arguments, logic, and evidence for the necessity of moral understandings and moral commitments in economics.” (Peter J. Hill, The Independent Review, Vol. 24 (4), 2020)

“John Maynard Keynes continues to cast a long shadow over economics and politics decades after his death. In this accessible, penetrating and convincing book, Victor V. Claar and Greg Forster illustrate that Keynes’s ideas are not only at the center of contemporary policy debates, but also involve the expression and implementation of a distinct philosophical outlook, one which shapes our culture’s understanding of the nature and ends of economics far more than we think.” (Samuel Gregg, Research Director at the Acton Institute and a Fellow of the Center for the Study of Law and Religion at Emory University, USA)
“Amidst all our prosperity, we nevertheless feel an anxiety, a palpable sense that something important is missing. Victor Claar and Greg Forster argue that the discipline of economics is partly to blame for having given us a powerful but morally vacuous technical apparatus. In this timely and important book, Claar and Forster point the way to a humane economics, based on a paradigm that reflects our true nature not as calculating automatons but as fully moral beings.” (James R. Otteson, Thomas W. Smith Presidential Chair in Business Ethics and professor of economics, Wake Forest University, USA) “If you think you know the imprint John Maynard Keynes left on economics and the world, you are in for a surprise. Claar and Forster build a compelling case that Keynes’s legacy is moral rather than scientific. Though explicit in his writings, Keynes’s moral philosophy and its effects have been overlooked. Keynes turned virtues into vices and vices into virtues. This moral revolution was more fruitful than his scientific innovations. And the fruit is bitter. Economists since Keynes, including Austrian and Chicago critics, have accepted his moral philosophy. Keynesian morals are built into the structures of public and private institutions, policies, and into our desires. We have material prosperity, but it is hollow. This fine book is in the spirit of Wilhelm Röpke, Keynes’s most perceptive contemporaneous critic.” (J. Daniel Hammond, Hultquist Family Professor, Wake Forest University, USA)

“This is a courageous book.  It asks economists to not only transcend their standard parameters and to realize that they are students of human conduct but also to grasp that human conduct inescapably has a moral dimension.  The authors show that a failure to consider the moral dimension of human conduct leads to the ad nauseum fluctuations in our political life between the socialist left and the fascist right.  Economists—indeed all social scientists—need to address the underlying meaning of human life.  Consumption is not what life is ultimately about. This book will please neither standard economists nor most contemporary moralists, but to anyone who realizes that morality concerns flesh-and-blood human beings for whom the economic side of life does not exist in splendid isolation apart from the rest of human life, it is an intellectual call to arms. Simply put, once we understand that there is telos to human life that is not death, but human flourishing, then we can see that Keynes was manifestly wrong.” (Dr. Douglas B. Rasmussen, Professor of Philosophy, St. John’s University, USA)

“Claar and Forster’s thought-provoking book reminds economists of the moral roots of our profession - roots from which common models stem and moral implications are derived whether we acknowledge them or not. In their delightful prose, they use the history of Keynesianism to call the profession to (re)consider its moral foundations and give up the pretense of positive analysis in favor of consciously reflecting on human dignity, the transcendent, and their roles in economics.” (Angela K. Dills, Gimelstob-Landry Distinguished Professor of Regional Economic Development, Western Carolina University, USA)

“Surrounding us today are messages for simplifying our homes and our lives, for possessing and doing only things that “spark joy”—in short, for re-examining the consumerism that has been rampant in the post-World War II era. Meanwhile, governments pursue economic policies organized around targets for inflation and expectations for growth in national GDP that depend analytically upon the centrality of consumption and anthropologically on what Lord Keynes depicted as the “animal spirits” of mankind. Claar and Forster provide a valuable service by exploring how the 20th-century Keynesian revolution in political economy was wrought despite the availability of alternative paradigms, by explicating the troubling consequences of that victory, and by calling for a new conversation about the moral anthropology, economic theory, and social philosophies that might help us better align public policy with our growing dis-ease at being mere cogs in the machine of producing aggregate demand.” (Lenore T. Ealy, Ph.D., President, The Philanthropic Enterprise)

“Claar and Forster issue a clarion call to economists to re-examine the normative roots of their profession. They present a cogent analysis of how J.M Keynes’s moral vision of a consumption-driven economy is transformed by the Keynesian Revolution into an economics solely geared to serving humans as ‘bundles of appetites’. Through a comparative examination of other paradigms in the history of moral reasoning about economic action, they provide a well-reasoned argument for a return to a teleologically-grounded economics.” (Edd Noell, Professor of Economics, Westmont College, and President, Association of Christian Economists)

“Much to the chagrin of economists, thinking about human betterment requires more than a theory of rational individuals with preferences and resources interacting in markets. We need a framework for thinking about social organization outside markets, and an ethical theory based on more than hedonic calculation. Claar and Forster walk us through past proposals for combining ethics, social organization and markets, and then ask how we might begin to reframe such a relationship today. You will probably not agree with everything here, but you will find much to ponder.” (Ross B. Emmett, Professor of Political Economy, Arizona State University, USA)