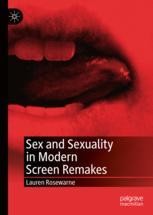 Sex and Sexuality in Modern Screen Remakes examines how sexiness, sexuality and revisited sexual politics are used to modernize film and TV remakes. This exploration provides insight into the ever-evolving—and ever-contested—role of sex in society, and scrutinizes the politics and economics underpinning modern media reproduction. More nudity, kinky sex, and queer content are increasingly deployed in remakes to attract, and to titillate, a new generation of viewers.

Though increased sex is often considered a sign of modernity, gratuitous displays of female nudity can sometimes be interpreted as sexist and anachronistic, in turn highlighting that progressiveness around sexuality in contemporary media is not a linear story. Also examined therefore, are remakes that reduce the sexual content to appear cutting-edge and cognizant of the demands of today’s audiences.
Show all
About the authors

Lauren Rosewarne is Senior Lecturer in the School of Social and Political Sciences at the University of Melbourne, Australia, and is an expert in sex, gender, media and popular culture. This is Lauren’s tenth book.

“Lauren Rosewarne’s examination of the applications of sexuality and the erotic in modern screen and TV remakes is both illuminating and wide-ranging, taking on board a variety of themes which once would have been unheard of in mainstream culture.” (DVD Choice, dvdchoices.co.uk, August 18, 2019)
“Sex and Sexuality in Modern Screen Remakes is an academic textbook that examines sexuality and sexual politics through the lens of rigorous and peer-reviewed research. … this is worth the read. While this is an academic work it is still accessible to non-scholarly audiences, Sex and Sexuality in Modern Screen Remakes puts a lot of things in perspective.” (Lizzy Garcia, But why tho?, August 9, 2019)