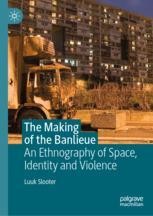 The Making of the Banlieue

An Ethnography of Space, Identity and Violence

This book studies and disaggregates the "crisis of the suburbs" in Paris through the stories of inhabitants in 4000sud: a French suburban neighborhood. These stories have become pressing in the aftermath of the recent wave of terrorist attacks in France. The French banlieues are some of the most prominent and infamous examples of urban neighborhoods affected by vandalism, rioting, criminality and chronic poverty. Based on extensive ethnographic research, the book explores the making of the French suburban crisis as constituted both externally (by state actors) and internally, by young people at the street corner. It reveals how the French state’s understanding of banlieue violence, and subsequent policy measures, contribute to the creation and hardening of boundaries between "us" and "them".
The book takes the reader on a journey from the city center of Paris to the heart of neighborhood 4000sud. It unveils how young suburban residents try to cope simultaneously with the negative images imposed on them from the outside, and the disciplinary expectations of their peers on the street. In search for identity and dignity they navigate life through diverging strategies: they escape the neighborhood, contest stereotypical images through (violent) protest, or confirm and act out the image of "gangster from the ghetto". Drawing on Urban Sociology, Human Geography, and Cultural Anthropology, this book offers new analytical vocabularies to understand the connections between place-making processes, social identity dynamics and violent performances. The book is written for a broad audience of students, scholars and policy makers interested in contemporary (sub)urban violence in Europe.

Luuk Slooter is Assistant Professor in Conflict Studies at the History Department and the Centre for Global Challenges at Utrecht University, the Netherlands. In December 2015 he completed his PhD at Utrecht University and l'École des Hautes Études en Sciences Sociales in Paris. Until 2017, he was Assistant Professor at the Centre for International Conflict Analysis and Management (Radboud University, Nijmegen), where he taught courses on terrorism, urban violence, and security policies.

“This carefully researched and beautifully written book provides us with a much needed account that resists the homogenisation of banlieue youth as an undifferentiated, rowdy, violent mass. Luuk invites us to hear their voices; at times unruly, perhaps violent even, but far from the stereotypical images that demonise them en masse.” (Professor Mustafa Dikeç, Ecole d'Urbanisme de Paris)

“Since the late seventies, the French ‘banlieues’ have been famous all over the world for their riots, with a peak in 2005. However, apart from these pivotal moments, we don’t know much about these neighbourhoods and their inhabitants. This is why this book is so important: living there, sharing the daily experience of young people, talking with them during months of fieldwork enables Luuk to offer us an impressive, perfectly documented study: a great monograph!” (Professor Michel Wieviorka, Fondation Maison des Sciences de l’Homme)

“The book is a rare, nuanced and holistical examination of the implications of one of Europe’s most important bouts of civil unrest in the past century. It puts human stories to inhabitants of some of the most marginalised areas of contemporary Europe and demonstrates their daily struggles and strategies in an effort to become more, and not less, French.” (Joseph Downing, European Institute, London School of Economics)

Book Title
The Making of the Banlieue
Book Subtitle
An Ethnography of Space, Identity and Violence
Authors
Copyright
2019
Publisher
Palgrave Macmillan
Copyright Holder
The Editor(s) (if applicable) and The Author(s), under exclusive license to Springer Nature Switzerland AG