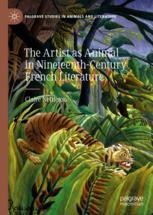 The Artist as Animal in Nineteenth-Century French Literature

The Artist as Animal in Nineteenth-Century French Literature traces the evolution of the relationship between artists and animals in fiction from the Second Empire to the fin de siècle. This book examines examples of visual literature, inspired by the struggles of artists such as Edouard Manet and Vincent van Gogh. Edmond and Jules de Goncourt’s Manette Salomon (1867), Émile Zola’s Therèse Raquin (1867), Jules Laforgue’s “At the Berlin Aquarium” (1895) and “Impressionism” (1883), Octave Mirbeau’s In the Sky (1892-1893) and Rachilde’s L’Animale (1893) depict vanguard painters and performers as being like animals, whose unique vision revolted against stifling traditions. Juxtaposing these literary works with contemporary animal theory (McHugh, Deleuze, Guattari and Derrida), zoo studies (Berger, Rothfels and Lippit) and feminism (Donovan, Adams and Haraway), Claire Nettleton explores the extent to which the nineteenth-century dissolution of the human subject contributed to a radical, modern aesthetic. Utilizing these interdisciplinary methodologies, Nettleton argues that while inducing anxiety regarding traditional humanist structures, the “artist-animal,” an embodiment of artistic liberation within an urban setting, is, at the same time, a paradigmatic trope of modernity.

Claire Nettleton is Visiting Assistant Professor of French at Pomona College, USA, and editor of Viral Culture: How CRISPR Gene Editing and the Microbiome Transform Humanity and the Humanities (2020), based on a colloquium she organized, and writer of multiple articles and essays on the intersection of animal studies, the history of science, visual art and avant-garde fiction.

“Claire Nettleton's The Artist as Animal brings us to the intersection of animal studies, the history of science, aesthetics, and urbanization, and in drawing from these fields, offers fresh insight into the figure of the "animal artist" in the works of the Goncourt brothers, Zola, Laforgue, Mirbeau, and Rachilde. Nettleton's book shows a fine sensitivity to the changes in urban landscape in the period and marks a significant contribution to the animal studies in French turn-of-the century fiction. Nettleton is a consummate stylist. Her writing is vibrant and energetic. Readers of her book will find it hard to put it down.” (Robert Ziegler, Professor Emeritus of French Literature, Montana Tech, USA)

“Claire Nettleton’s expertly researched and outstandingly argued case for a careful consideration of the animal-artist trope maps important and yet unexplored nodal points in the rise of modern art – compelling, informative, and well written.” (Giovanni Aloi, Art Historian, School of the Art Institute of Chicago, USA, and Editor in Chief of Antennae: The Journal of Nature in Visual Culture)

“What might a literary history of the Anthropocene look like? What would be its leitmotifs and how would its pictures come to life? Claire Nettleton’s The Artist as Animal in Nineteenth-Century French Literature brings together literature, art, and science to broach such territory. Nettleton reveals the interconnections between writers Emile Zola, Jules Laforgue, Octave Mirbeau, and Rachilde, artists Claude Monet, Pierre-Auguste Renoir, Edgar Degas, Berthe Morisot, Paul Cézanne and Alfred Sisley, and naturalists Georges-Louis Leclerc Buffon,Charles Darwin, Georges Cuvier, and Etienne Geoffrey Saint-Hilaire. The book provides a scintillating take on how nineteenth-century evolutionary theory influenced representations of animal-human relations in French art and literature. With lively prose and vivid imagery, the book follows the winding path of the ‘artist-animal’ through the French cultural landscape of the Second Empire (1852-1870) and the Belle Epoque (1871-1914), showing how this figure prodded society at large to think more ‘animalistically’ than ‘humanistically.’” (Charissa N. Terranova, Professor of Visual and Performing Arts, University of Texas at Dallas, USA)

“Claire Nettleton’s Animal as Artist brilliantly expands the field of animal studies by bringing it into a compelling conversation with literature and visual studies. Her notion of the animal artist posits at once a subjectivity but also creativity to animals, producing the possibility of imagining animals not as the objects of literature and art, as their origins.” (Akira Mizuta Lippit, Vice Dean of Faculty, School of Cinematic Arts, University of Southern California, USA)

“This timely book presents a unique and original standpoint on the intricate relationships between art and nature in the nineteenth century, filing a gap in the history of art as well as the history of science.” (François-Joseph Lapointe, Professor of Biological Sciences and Bioartist, The University of Montreal, Canada)

“Claire Nettleton’s book builds bridges between recent works on the animal question in various regions of the world while retracing historical genealogies of animal perceptions in a French context. By focusing on the collapse of the animal-human divide in nineteenth-century French literature, the author adds an important contribution to a currently flourishing discourse on (anti-) speciesism in critical animal studies.” (Bénédicte Boisseron, Associate Professor of Afroamerican and African Studies, University of Michigan, USA, and author of Afro-Dog: Blackness and the Animal Question (2018))