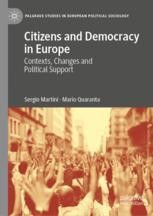 Citizens and Democracy in Europe

This book provides an innovative and in-depth analysis of how attitudes towards democracy and political institutions differ across 31 countries in Europe, and how these attitudes have fluctuated over time. After addressing conceptual and measurement issues about the evaluative dimension of political support, the authors develop a unique framework assessing the role of the institutional format, the quality of the political process, macro-economic conditions and inequality to explain trends and differences in political satisfaction and trust. The book further explores how education, employment and electoral status create gaps in political support. Citizens and Democracy in Europe will be of interest to students and scholars in comparative politics, political sociology and public opinion.

Sergio Martini is a post-doctoral fellow at the Centre for the Study of Political Change in the Department of Social, Political and Cognitive Sciences at the University of Siena, Italy.

Mario Quaranta is Assistant Professor of Political Science in the Department of Sociology and Social Research at the University of Trento, Italy.

“With an unprecedented collection of empirical evidence, Martini and Quaranta address a central issue of our time: the decline in political trust in European democracies. They find a broad decline in trust that is magnified by a widening social status gap in political support, possibly linked to the policy outputs of European political systems. This book is a must-read for scholars concerned with the erosion of political support, the correlate of support, and the implications for democratic governments.” (Russell J. Dalton, Center for the Study of Democracy, University of California, Irvine, USA)

“Based on a rigorous, exhaustive and detailed analysis of secondary data, the authors engage with and discuss the potential hypotheses to explain cross-national differences as well the evolution of satisfaction with democracy and political trust over time. They give great support to the evaluative components of political support (input and output), their increasing importance over time, and how these are conditioned by direct and interactive effects of contextual factors. In my opinion, this is a must-read for any expert on these topics.” (Mariano Torcal, Full Professor in Political Science, Universitat Pompeu Fabra, Barcelona, Spain)

“This is an important book that provides in-depth knowledge about the foundations of political support in European democracies. Drawing on a large set of survey data, the authors skilfully and intelligibly demonstrate that the current state of European liberal democracies might be less bleak than public discourse often suggests. Readers interested in embarking on an empirically rich and methodologically sound journey across time and space will be guided with ease through the conceptual and empirical complexities that constitute political support. In a unique manner, the authors investigate the within and between-countries' impact of input and output institutions, individual characteristics of 'losing' or 'winning', and their interplay. Thanks to the authors' impressive efforts, readers might eventually better understand the underlying causes for the observable rise of populism and political disenchantment of parts of European societies. By the same token, policy-makers might be better equipped to grasp and act in accordance with the wide-ranging consequences not only of economic performance but of good government too.” (Sonja Zmerli, Professor of Political Science, Sciences Po Grenoble, France)

“Amidst resurgent claims of a democratic crisis in political support, this book stands out for not falling for the trappings of the crisis narrative but explaining the societal and institutional mechanisms that drive cross-national and longitudinal variation in political trust. The authors provide an encompassing overview of the literature, an innovative spin to old questions, as well as a richness in systematic empirical analyses of individual and contextual drivers of political trust. This book should appeal to both newcomers to and veterans in the field of political support. Martini and Quaranta are two of the most interesting and rigorous young scholars in the field of political support.” (Tom van der Meer, Professor of Political Science, University of Amsterdam, The Netherlands)