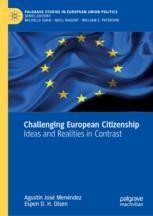 Ideas and Realities in Contrast

This book provides a critique of the way in which European citizenship is imagined and practiced. Setting their analysis in its full historical context, the authors challenge preconceived ideas about European citizenship on the basis of a detailed reconstruction of political, social and economic practice. In particular, they show the extent to which the elimination of formal internal borders within Europe has come hand in glove with the emergence of new socio-economic boundaries and the hardening of external borders. The book concludes with a number of concrete proposals to forge a genuinely post-national form of membership.

Agustín José Menéndez is Lecturer at the Universidad Autónoma de Madrid, Spain, and Visiting Researcher, ARENA, University of Oslo, Norway. He is co-author of The Constitution’s Gift (with J.E. Fossum, 2011). He was chief editor of the European Law Journal (2013-2018).

Espen D. H. Olsen is Senior Researcher, ARENA – Centre for European Studies, University of Oslo, Norway. He is the author of Transnational Citizenship in the European Union: Past, Present and Future (2012).

“This book is an intelligent and elegant review of the European citizenship legal story. What was born with the promise of enlarging European citizens’ rights is critically exposed as being in danger of downgrading constitutional rights. It is indeed a well-argued case for reassessing the merits of European integration.” (Massimo La Torre, Università degli Studi "Magna Graecia" di Catanzaro, Italy)

“Through a well-documented analysis of the history of European citizenship before and after its formal establishment by the Maastricht Treaty in 1992, this book makes an original contribution to contemporary debates on democracy and citizenship. Challenging the alternative between nationalist withdrawal and abstract cosmopolitanism, the authors argue in favour of a post-national citizenship that preserves the achievements of the democratic and cocial state of the 20th century.” (Catherine Colliot-Thélène, Université de Rennes, France)

“In a deep engagement with the essentials of the Union, two leading theorists of EU politics produce a compact and lucid encyclopaedia of the crucial internal clashes inherent in contemporary European citizenship. Approached from the vantage point of the classics of liberty and political community, these form an eminently readable account, amounting to superbly critical euro-optimism in difficult times. Engaging with it will be a must.” (Dimitry Kochenov, University of Groningen, The Netherlands)

“Is EU citizenship simply a pan-European form of national citizenship or will it fundamentally transform the concept and operation of citizenship itself? This book shows how EU citizenship has not yet uploaded Europe’s political and welfare communities to the supranational level, privileging private property and entrepreneurial freedom for the “economically active” over mutual commitments and a shared political identity.” (Willem Maas, York University, Canada)