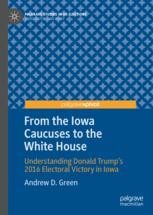 From the Iowa Caucuses to the White House

Donald Trump won a significant victory in Iowa in 2016. Although Iowa was carried by Barack Obama in 2008 and 2012, Trump won the popular vote in 93 of its 99 counties, 32 of which were carried by Obama in 2012. What explains this significant victory, in which a third of Iowa’s counties were flipped? Through a mixed-methods approach, this volume demonstrates that Trump’s electoral victory was shaped by three key factors: firstly, the electorate’s desire for “change” in Washington, D.C.; secondly, Trump’s successful appeals to both the Republican base and white, working-class voters who had previously supported Barack Obama; and thirdly, Iowa’s conservative ideological tendency regarding immigration and race. While contributing to emerging literature on the 2016 presidential elections, this book also serves to aid educators with a published resource on Iowa's electoral politics.

“We can finally stop all the speculation surrounding Donald Trump’s surprise victory in Iowa in 2016. Andrew Green’s insightful new book provides the first systematic and, importantly, data-driven look as to how Iowa, a state that twice voted for Obama, overwhelmingly voted for Trump. Anyone interested in understanding the shifting dynamics of presidential politics, where to look for answers in 2020, or why Iowa should still be considered a swing state needs to read this book.” (Christopher W. Larimer, Professor of Political Science, University of Northern Iowa, USA)

“Theories about why Donald Trump won the 2016 presidential election are common. In this book about the election in Iowa, Andrew Green brings evidence to the question. His in-depth analysis explores some of the common themes associated with the election, including change and the urban-rural divide, in order to explain the political conditions and campaign choices that led to a Trump victory.” (Julia Azari, Associate Professor of Political Science, Marquette University, USA)

“In this impressive volume, Andrew Green takes a deep dive into Iowa’s pivot to Trump in 2016.  After detailing the enormity of the change, Green unpacks perspectives among Iowan political elites for local knowledge to inform plausible accounts on what happened, and then brings a series of regression analyses to bear in testing these accounts with county-wide and a sample of individual voters.  The result is the definitive study of the Trump surprise – in a state going for Democrats in six of the last seven presidential elections.” (Dan Thomas, Professor Emeritus, Wartburg College, USA)