Palgrave Studies in the History of Social Movements
Free Preview 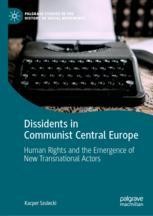 Human Rights and the Emergence of New Transnational Actors

This monograph traces the history of the dissident as a transnational phenomenon, exploring Soviet dissidents in Communist Central Europe from the mid-1960s until 1989. It argues that our understanding of the transnational activist would not be what it is today without the input of Central European oppositionists and ties the term to the global emergence and evolution of human rights. The book examines how we define dissidents and explores the association of political resistance to authoritarian regimes, as well as the impact of domestic and international recognition of the dissident figure. Turning to literature to analyse the meaning and impact of the dissident label, the book also incorporates interviews and primary accounts from former activists. Combining a unique theoretical approach with new empirical material, this book will appeal to students and scholars of contemporary history, politics and culture in Central Europe.

Kacper Szulecki is Assistant Professor in the Department of Political Science, University of Oslo, Norway. He was previously a Dahrendorf Fellow at the Hertie School of Governance (Berlin, Germany), a visiting researcher at the Robert Schuman Centre for Advanced Studies (Florence, Italy) and a researcher at the Cluster of Excellence ‘Cultural Foundations of Integration’, University of Konstanz (Konstanz, Germany).

“Dissidents in Communist Central Europe is a welcome addition to the field of dissent studies and one to be recommended to all scholars with an interest in the history and practice of dissidence.” (James P. Brown, Europe-Asia Studies, Vol. 73 (3), March 22, 2021)

“Kacper Szulecki’s book is an extremely inspiring and thought-provoking read. It can be considered one of the most important books ever published on various forms of opposition to communism. Moreover, it also provides important impulses for understanding political conflicts in the modern, interconnected world and the movements currently fighting against dictatorships.” (Jan Olaszek, H-Soz-Kult, hsozkult.de, December 8, 2020)

“One of the merits of the book is that it acknowledges the absence of women in the historiography of dissident movements in East Central Europe. As Szulecki observes, this was due not only to the persistent machismo within the opposition circles, but also to the fashioning of the dissident figure, which was mainly constructed by the Western media, public, and scholars.” (Una Blagojević, Hungarian Historical Review, Vol. 9 (2), 2020)

“The book is an inspiring and engaging read. It gives much needed analytical perspective on dissidents. It also prompts us to re-think conventional historical narratives on postwar Central Europe that we have often learned from dissidents.” (Aspen Review, Issue 2, 2020)

“Kacper Szulecki tackles one of the holy words of the twentieth century. Scholarship has long needed an analysis of the figure of the dissident, to overcome the warm and fuzzy notion that the dissident is simply a noble person opposing a bad regime. Szulecki’s analysis is rigorous, clear, and engaging. The payoff is significant: He gives us back the dissident, now recovered as a useful category of historical, global analysis. This is an essential text for scholars of contentious politics.” (Padraic Kenney, Professor of History and International Studies, Indiana University Bloomington, USA)
Show all