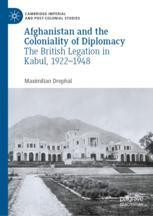 Afghanistan and the Coloniality of Diplomacy

This book offers an institutional history of the British Legation in Kabul, which was established in response to the independence of Afghanistan in 1919. It contextualises this diplomatic mission in the wider remit of Anglo-Afghan relations and diplomacy from the nineteenth to the twenty-first century, examining the networks of family and profession that established the institution’s colonial foundations and its connections across South Asia and the Indian Ocean. The study presents the British Legation as a late imperial institution, which materialised colonialism's governmental practices in the age of independence. Ultimately, it demonstrates the continuation of asymmetries forged in the Anglo-Afghan encounter and shows how these were transformed into instances of diplomatic inequality in the realm of international relations. Approaching diplomacy through the themes of performance, the body and architecture, and in the context of knowledge transfers, this work offers new perspectives on international relations through a cultural history of diplomacy.

Maximilian Drephal lectures in the School of Politics and International Studies at Loughborough University, UK, and is Research Associate in the Department of History at the University of Sheffield, UK, where he has taught as Lecturer in International History. He has previously published in Modern Asian Studies and in the edited collection Sport and Diplomacy: Games within Games (2018).

“Afghanistan has been, and continues to be, a site for the enacting of various experiments in imperial and neo-imperial governance. In Afghanistan and the Coloniality of Diplomacy Maximilian Drephal offers an ambitious and strikingly original diplomatic history of interwar Anglo-Afghan relations that makes a crucial historical intervention on the ‘coloniality’ of foreign relations as such, including its embodied, literary, and architectural practices. The book reaches across the disciplinary boundaries of South Asian history, imperial history, diplomatic history, Afghanistan studies, and critical International Relations, showing how the enacting of a particular form of imperial power operated in practice.” (Martin J. Bayly, London School of Economics and Political Science, UK)

“This book makes a number of original and important contributions to the historiography of Afghanistan, British Indian colonialism, and the British Empire. With illuminating detail, Drephal demonstrates the counter-intuitive fact that Afghan independence in 1919 intensified connections between Afghanistan, British India and the imperial system.  This is a welcome historical ethnography of a multi-layered diplomatic space that refreshingly combines micro- and macro-perspectives. The Legation comes alive here.” (Shah Mahmoud Hanifi, James Madison University, USA)

“Maximilian Drephal’s work opens important new vistas on our understandings of modern Afghanistan and the impact of its continuing relations with colonial powers following the moment of independence in the wake of the First World War. By skilfully combining such diverse historical fields as ‘new’ imperial, diplomatic and sports history, as well as the history of bodily comportment, Drephal paints a rich picture not only of Afghanistan’s new political trajectory, but also the daily lives of those shaping it. This book will redefine not only our understandings of relations between British India and Afghanistan during the eve of empire, but also of the diplomatic workings of that empire on a global scale.” (Benjamin D. Hopkins, The George Washington University, USA)