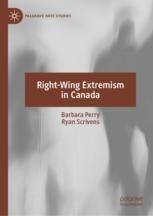 This book comprehensively examines right-wing extremism (RWE) in Canada, discussing the lengthy history of violence and distribution, ideological bases, actions, organizational capacity and connectivity of these extremist groups. It explores the current landscape, the factors that give rise to and minimise these extremist groups, strategies for countering these groups, and the emergence of the ‘Alt-Right’. It draws on interviews with law enforcement officials, community activists, and current and former right-wing activists to inform and offer practical advice, paired with analyses of open source intelligence on the state of the RWE movement in Canada. The historical and contemporary contours of right-wing extremism in Canada are situated within the social, political, and cultural landscape that has shaped the movement. It will be of particular interest to students and researchers of criminology, sociology, social justice, terrorism and political violence.

Barbara Perry is Professor in the Faculty of Social Science and Humanities at the University of Ontario Institute of Technology, Canada. She has written extensively on social justice generally, and hate crime specifically. She has published several books spanning both areas, including Diversity, Crime and Justice in Canada, and In the Name of Hate: Understanding Hate Crime. She is also Director of the Centre on Hate, Bias and Extremism.
Ryan Scrivens is Assistant Professor in the School of Criminal Justice at Michigan State University, USA. Ryan is also a Research Associate at the International CyberCrime Research Centre at Simon Fraser University, a Visiting Researcher at the VOX-Pol Network of Excellence, and the Associate Editor for Theses of Perspectives on Terrorism. He recently earned his Ph.D. in Criminology from Simon Fraser University

“Surprisingly little has been written about the right-wing extremism in Canada. Yet after the recent mass shootings in Charleston, Quebec City, and Christchurch, the threat from the far-right has come to the fore. This book offers the first comprehensive introduction to the history and nature of right-wing extremism in Canada. Well researched and thoughtful, it is essential reading for anyone engaged in the study of violent extremism, and the global rise and spread of a re-invigorated right-wing threat to public safety” (Lorne L. Dawson, Director, Canadian Network for Research on Terrorism, Security and Society, University of Waterloo, Canada)

“Right-Wing Extremism in Canada acknowledges a reality far too many have ignored—that far right extremists pose very real threats to Canadian democracy and inclusion. Barbara Perry and Ryan Scrivens’ smart, timely, and nuanced analysis makes clear how far right extremism persists in Canada and its cross-border links to U.S. and global networks. Both accessible and theoretically informed, they illuminate how Canadian right-wing extremists’ work to mainstream their ideas and forge links to state politics” (Robert Futrell, Professor and Chair of Sociology, University of Nevada, USA)

“With right-wing extremism resurgent across North America and Europe, there is increased attention and a need for research and analysis. The Canadian context for, and manifestations of, this phenomenon have received less attention from scholars in terms of both its uniqueness and how it is related to and can add to understanding of wider right-wing extremism.  Barbara Perry and Ryan Scrivens are ideally suited to do this based on their track record and reputation for important and insightful research on extremism and hate in Canada. With Right-Wing Extremism in Canada, they have written a book based on rigorous research that provides vital historical background and social, political and cultural context, organizational and policy analysis, insights from law enforcement, community activists and those previously involved in extreme-right movements, as well as practical recommendations. I would recommend this book to all those interested in and working on right-wing extremism in and beyond Canada, as well as on Canadian society and politics more generally, both in and beyond academia” (Dr. Aaron Winter, University of East London, UK)