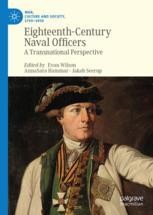 This book surveys the lives and careers of naval officers across Europe at the height of the age of sail. It traces the professionalization of naval officers by exploring their preparation for life at sea and the challenges they faced while in command. It also demonstrates the uniqueness of the maritime experience, as long voyages and isolation at sea cemented their bond with naval officers across Europe while separating them from landlubbers. It depicts, in a way no previous study has, the parameters of their shared experiences—both the similarities that crossed national boundaries and connected officers, and the differences that can only be seen from an international perspective.

Evan Wilson is Assistant Professor in the John B. Hattendorf Center for Maritime Historical Research at the U.S. Naval War College. His research focuses on European and American naval history from the age of sail to the twentieth century. He is the author of A Social History of British Naval Officers, 1775–1815 (2017) and the co-editor of Strategy and the Sea (2016).

AnnaSara Hammar is Research Fellow at the Centre for Maritime Studies at Stockholm University, Sweden. She is the editor of Forum Navale, published by the Swedish association for Maritime History. Her thesis, “Between Chaos and Control: Social Order in the Swedish Navy, 1670-1716,” received the Jan Glete Prize in 2014. She is currently working on a book project about the history of the Swedish navy.

Jakob Seerup is a curator at Bornholm’s Museum, Denmark. He has worked as a curator and researcher at the Royal Danish Naval Museum, the Danish Arsenal Museum, and the National Museum of Denmark. He has written extensively about the Danish navy in the age of sail, specializing in the cultural history of the navy. His research has been published in both Danish and international journals.

“This book will appeal to those interested in naval officer development, in the context of growing centralized state control. Social historians will appreciate the effort to explore the social background of officers, their path within each nation’s navy, and their standing in society.” (Thomas Malcomson, The Northern Mariner, cnrs-scrn.org, Vol. 30 (1), 2020)

“It ought to be rare if not impossible to write naval history bounded by a single country or a single language. Unfortunately it is rather the rule than the exception. In assembling comparative studies of the officer corps of the major navies of the 18th century, the contributors to this volume have done something so obvious and so important that it is astonishing that no-one has ever attempted it before. If there was ever an excuse for this shameful neglect, it exists no longer.” (N.A.M. Rodger, Emeritus Fellow, All Souls College, University of Oxford, UK)

“The overwhelming figure of Admiral Nelson and his time dominates the average readers’ understanding of the age of sail. So what a relief it is to read a book that finally tells us about officers in other navies! Let us hope that other researchers will follow in the wake of the contributors to this book and choose an international and comparative approach to naval history.” (Søren Nørby, Assistant Professor, Royal Danish Defence College, Denmark)