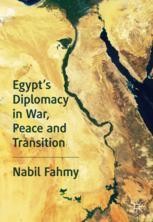 Written from the perspective of an insider of the most prominent events in the Middle East over the last fifty years, this book examines Egypt’s diplomacy in transformative times of war, peace and transition. The author offers unique insights, first-hand information, singular documents, critical and candid analysis, as well as case studies, richly sharing his experiences as the country’s Foreign Minister and ambassador. This project covers a wide range of issues including the Arab-Israeli peace process, the liberation of Kuwait, the invasion of Iraq, nuclear weapons proliferation in the region, relations with the United States, Russia and other major international and regional players. Most importantly, it offers a series of potential trajectories on the future of Egypt and its relations within the region and the world. This is an essential work for a number of audiences, including scholars, graduate students, researchers, as well as policy makers, and is strongly appealing for anyone who is interested in international relations and Middle Eastern politics.

Nabil Fahmy is Former Foreign Affairs Minister of Egypt and Dean of the School of Global Affairs and Public Policy at The American University in Cairo, Egypt.

“Dr. Nabil Fahmy is a preeminent career diplomat who has found success in politics and academia. He has a deep comprehension of the Egyptian reality, dynamics in the United States and the United Nations, and, in particular, the Middle East. He writes from broad experience, extensive knowledge, and a profound understanding of critical issues. In this book, Dr. Fahmy’s insights illuminate a whole world for the reader” (Dr. Nasser Alkidwa, Chairman of the Board of Directors, Yasser Arafat Foundation, Palestine)

“This is a timely and original contribution to the scholarship on the Middle East ... Although this is not a memoir in the usual sense, the book also tells us much about the author – one of the prominent diplomats of his generation and the proud son of an equally prominent and courageous diplomat. Dr. Nabil FAHMY writes with the understated, nuanced language of his lifelong profession and the skills and foresight of a University Don” (Lakhdar Brahimi, Former Foreign Minister, Algeria)

“Nabil Fahmy is uniquely placed to write about an important part of Egypt’s history, including post 2011. This book is must reading for all who want to shed more light about Egypt’s role in international affairs in the last fifty years.” (Marwan Muasher, Former Foreign Minister of Jordan and Vice President for Studies, Carnegie Endowment for International Peace)

“Nabil Fahmy a distinguished veteran Egyptian diplomat and a former Foreign Minister is in a unique position to offer a learnt analysis on some of the most important transformative events in Middle East diplomacy. With the region in a tumultuous flux, this is invaluable reading for diplomats professionals, academics, historians and the general public.” (Nabil El Araby, Former Secretary General of the Arab League and Former Foreign Minister of Egypt)

“Former Egyptian foreign minister Nabil Fahmy is widely regarded as one of the most thoughtful Arab diplomats of the past several decades. Analytical and independent minded, he brings his perspective to important political events of the past half a century, with new insights and information, derived from being a key player in these events – especially on American mediation in the Middle East conflict, nuclear proliferation, and Arab relations with Iran. Accessible and informative, this book fills a gap in the literature. Highly recommended.” (Shibley Telhami, Anwar Sadat Professor for Peace and Development at the University of Maryland, and Non-Resident Senior Fellow at the Brookings Institution)

“This book is an invaluable distillation of Nabil Fahmy's rich experience as a career diplomat and architect of Egypt's foreign policy at a crucial stage of Middle East politics. I worked with Ambassador and later Minister Fahmy as a highly respected diplomatic colleague at the Conference on Disarmament and the many NPT Review Conferences we attended. He contributed immensely to the formulation of Egyptian and Non-aligned policies on disarmament and nuclear issues.” (Jayantha Dhanapala, former Sri Lanka Ambassador and Permanent Representative to the UN in Geneva 1984-7 and former UN Under-Secretary-General for Disarmament Affairs 1998-2003)

“An insider’s view by an astute observer, an objective narrative by an active player, a candid story by a refined diplomat, Fahmy’s volume is a great contribution to the study of international politics in the conflict-prone Middle East.” (Ghassan Salamé, Professor Emeritus, Sciencespo, France, Former Minister of Lebanon, and UNSG representative, Libya)

“Nabil Fahmy has given us the most lucid and analytical insider's view of Egyptian diplomacy at critical periods over the past half century. A book that must be read by anyone who wishes to understand today's west Asia and the emerging disordered world.” (Shivshankar Menon, Former National Security Advisor for India)

“Nabil Fahmy provides invaluable insights on Arab and Egyptian diplomatic perspectives of truly historic events. His characteristically candid reflections result from his role as a diplomatic insider with unique access to the center of power for over a half century. This is essential reading for practitioners and scholars alike.” (Stephen Hadley, Former United States National Security Advisor)

“Nabil Fahmy, one of Egypt’s foremost diplomats during the past thirty years, has written a vibrant history of Egyptian diplomacy, laced with personal anecdotes and sound policy advice. Fahmy, a true believer in Egypt as umm al-dunya – mother of the world – conveys with passion his view of Egypt’s essential role as an Arab leader and balancing force between East and West.” (Daniel C. Kurtzer, Former United States Ambassador to Egypt and Israel)

“Nabil Fahmy’s great diplomatic experience as Minister of Foreign Affairs and Ambassador allowed him to create a useful guide that undoubtedly will help to understand not only the development of Egypt’s foreign policy but also the past and ongoing regional processes. Reader has an opportunity to immerse into Middle East reality and draw his own conclusion based on the presented deep analysis of the reasons of the current events there.” (Mikhail Bogdanov, Russian Diplomat, Special Representative of the President of the Russian Federation for the Middle East and African countries, Deputy Foreign Minister, Russian Federation)
Show all