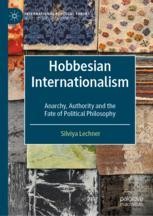 Anarchy, Authority and the Fate of Political Philosophy

This book sets out to re-examine the foundations of Thomas Hobbes’s political philosophy, and to develop a Hobbesian normative theory of international relations. Its central thesis is that two concepts – anarchy and authority – constitute the core of Hobbes's political philosophy whose aim is to justify the state. The Hobbesian state is a type of authority  (juridical, public, coercive, and supreme) which emerges under conditions of anarchy ('state of nature'). A state-of-nature argument makes a difference because it justifies authority without appeal to moral obligation. The book shows that the closest analogue of a Hobbesian authority in international relations is Kant's confederation of free states, where states enjoy 'anarchical' (equal) freedom. At present, this crucial form of freedom is being threatened by economic processes of globalisation, and by the resurgence of private authority across state borders.

Silviya Lechner was Assistant Professor and is currently a senior visiting research fellow at King’s College London, UK. She specialises in social and political philosophy, theory of action, and international political theory. She is the co-author of Practice Theory and International Relations (with M. Frost, 2018).

“In her erudite and detailed book, Hobbesian Internationalism: Anarchy, Authority and the Fate of Political Philosophy, Silviya Lechner provides a deep and comprehensive reading of Hobbes’s political philosophy by analyzing differences between Hobbes’s earlier works and his conclusive views in Leviathan. Lechner challenges both the orthodox interpretations of Hobbes’s political philosophy of the state and the realist reading of Hobbesian international political theory in two stages. First, she discusses two kinds of moral relations that are often underappreciated or ignored in realist readings of Hobbes, namely the laws of nature and covenants. Second, by analyzing the development of Hobbes’s ideas from his earlier works, which emphasized the laws of nature, to Leviathan, which emphasized covenant relations, Lechner goes further to constitute a Hobbesian international political theory that is based on Hobbes’s notion of covenant as a relation of trust and Kant’s account of international right.” (Dr Chiayu Chou, National Chengchi University, Taipei, Taiwan (R.O.C))

“What does Hobbes have to offer to the contemporary world? Silviya Lechner’s book provides a most engaging and novel answer by re-examining afresh Hobbes’s theory of the state and by developing a normative theory of international relations, termed ‘Hobbesian internationalism’. The work contains a thorough examination of key concepts of Hobbes’s political theory, such as authority and anarchy, provides powerful insights into Hobbes’s theory of inter-state relations, and stimulates reflections on new ways of thinking and doing politics, domestically and internationally. This book is a very valuable and original contribution not only to Hobbesian scholarship but also to the field of international political theory.” (Gabriella Slomp, St Andrews University, UK, and former editor of Hobbes Studies)