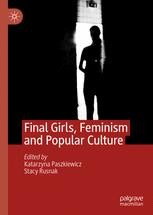 This volume examines contemporary reformulations of the ‘Final Girl’ in film, TV, literature and comic, expanding the discussion of the trope beyond the slasher subgenre. Focusing specifically on popular texts that emerged in the 21st century, the volume asks: What is the sociocultural context that facilitated the remarkable proliferation of the Final Girls? What kinds of stories are told in these narratives and can they help us make sense of feminism? What are the roles of literature and media in the reconsiderations of Carol J. Clover’s term of thirty years ago and how does this term continue to inform our understanding of popular culture? The contributors to this collection take up these concerns from diverse perspectives and with different answers, notably spanning theories of genre, posthumanism, gender, sexuality and race, as well as audience reception and spectatorship.

Katarzyna Paszkiewicz is Lecturer in English Studies at the University of the Balearic Islands, Spain, and member of ADHUC–Research Center for Theory, Gender and Sexuality (University of Barcelona). She has co-edited, with Mary Harrod, Women Do Genre in Film and Television (2017, Winner of first Prize in the BAFTSS Best Edited Collection competition) and published her monograph Genre, Authorship and Contemporary Women Filmmakers (2018).

“Final Girls, Feminism and Popular Culture fulfils its promise of providing a multidisciplinary and intersectional approach to the Final Girl trope. Each chapter’s unique approach and discussion of widely different genres ensures its relevance for scholars interested in media, gender and reception studies, while its understanding of feminism as an organic continuum helps to both illuminate and question the achievements of our current sociopolitical context.” (nexus, aedean.org, Issue 2, 2020)

“A fascinating exploration of the Final Girl and her place in feminist scholarship! Final Girls, Feminism and Popular Culture takes a wide-ranging look at the presence of this evocative trope in 21st century film and television as well as popular fiction and comics. Carol Clover first identified the Final Girl in her influential 1990s work on the horror/slasher film, and the editors begin this volume with a richly researched introduction that traces the use of that scholarship to support shifting and, at times, competing feminist perspectives on popular culture. The essays that follow continue what becomes a sustained and substantial conversation with Clover. Ambitiously conceived, lucidly written and transnational in its reach, Final Girls is packed with subtle readings of texts both popular and less widely known.  It is essential reading for anyone interested in the ways contemporary popular culture has imagined female heroism and resistance to suffering and violence.” (Kathleen Rowe Karlyn, Professor Emerita, University of Oregon)

“We all think we know what the Final Girl is. Carol Clover. Men, Women and Chain Saws. The last woman standing at the end of the slasher film, bloodied but ultimately unbowed, having overcome the (male) killer. Final Girls, Feminism and Popular Culture questions this formulation and considers the implications of this gendered trope for 21st century feminism: what do we mean by the Final Girl in a nonbinary, intersectional, multimodal world? Smart, rigorous and always entertaining, this outstanding book is essential reading for scholars, fans and filmmakers alike.” (Alison Peirse, Associate Professor in Film and Media, University of Leeds)