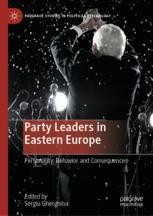 This book explores the relationship between the personality of political leaders, its interaction with top leadership positions and its impact on the respective parties' electoral performance and organization. It focuses on the less-investigated region of Eastern Europe and includes chapters on Bosnia-Herzegovina, Bulgaria, Croatia, Czech Republic, Georgia, Hungary, Poland, Montenegro, Romania, Serbia and Slovakia. Each chapter compares and contrasts two party leaders with at least two terms in office between 1991 and 2019. The book applies systematically a common theoretical and methodological framework across leaders and countries, thus providing rich empirical evidence.

Sergiu Gherghina is Lecturer in Comparative Politics at the Department of Politics, University of Glasgow, UK. His research interests lie in party politics, legislative and voting behavior, democratization, and the use of direct democracy.

“Offering valuable insights in political psychology, political leadership and party and electoral politics, this book will appeal to a wide audience. Focusing on ten post-communist countries, the authors examine leaders on six personality traits considering the influence of these on electoral performance and party organization. In an era of increased political personalization, this is a welcome addition to the literature.” (William Cross, Carleton University, Canada)

“The book is a very welcome contribution to the study of leaders of political parties, and of European politics more broadly. Following the growing interest both for the personalization of politics and for the involvement of citizens into selecting party leaders, a body of research has recently developed on the selection of party leaders. Yet, one of the main weaknesses of previous studies is that they have been mostly looking at West European and North American countries. This new book provides in that respect a very useful contribution by examining very carefully the situation in Central and Eastern Europe. The contribution of the book should however not be restricted to its empirical scope. Theoretically, it also strongly contributes to debates and theories on political leaders, political parties and democratic politics more broadly. Any future study on these topics would have to take into account several elements from this new publication coordinated by Sergiu Gherghina.” (Jean-Benoit Pilet, Université libre de Bruxelles, Belgium)

“This book is an important contribution to the study of political personalization and personalized politics. One of its main innovations is in presenting leader-party relationships from the perspective of the leaders. This is highly relevant in the era of personalised politics, which sees leaders at the center of the arena while parties are relegated to the back seat.” (Gideon Rahat, The Hebrew University of Jerusalem, Israel)

“Orban, Klaus, Babis, Kaczynski, Tusk, Dzurinda – the names of these and other East European political leaders are familiar and important enough to resonate even with those whose primary political interests lie beyond the world of post-communist Europe. This new study of political leadership in these countries offers valuable insights for anyone with an interest in the topic generally, drawing on a wealth of qualitative analysis by a strong team of country experts to test a number of hypotheses about the impact of leaders on voters and parties. These hypotheses are rooted in a wide range of psychological and behavioural theories about political leaders, which means that the evidence reported in this book carries considerable general relevance for scholars of comparative politics. But even if general theory is not your bag, the accounts of individual politicians can be read as fascinating vignettes of their varied personalities.” (Paul Webb, University of Sussex, UK)