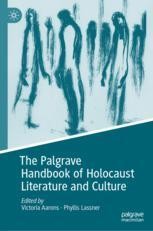 The Palgrave Handbook of Holocaust Literature and Culture

The Palgrave Handbook of Holocaust Literature and Culture reflects current approaches to Holocaust literature that open up future thinking on Holocaust representation. The chapters consider diverse generational perspectives—survivor writing, second and third generation—and genres—memoirs, poetry, novels, graphic narratives, films, video-testimonies, and other forms of literary and cultural expression. In turn, these perspectives create interactions among generations, genres, temporalities, and cultural contexts. The volume also participates in the ongoing project of responding to and talking through moments of rupture and incompletion that represent an opportunity to contribute to the making of meaning through the continuation of narratives of the past. As such, the chapters in this volume pose options for reading Holocaust texts, offering openings for further discussion and exploration. The inquiring body of interpretive scholarship responding to the Shoah becomes itself a story, a narrative that materially extends our inquiry into that history.

Victoria Aarons is O.R. and Eva Mitchell Distinguished Professor of Literature at Trinity University, USA. She is the author or editor of 11 books, including The New Diaspora: The Changing Landscape of American Jewish Fiction (2015); The Cambridge Companion to Saul Bellow (2016); Third-Generation Holocaust Narratives: Memory in Memoir and Fiction (2016); Third-Generation Holocaust Representation: Trauma, History, and Memory (co-authored with Alan Berger) (2017), The New Jewish American Literary Studies (2019), and Holocaust Graphic Narratives: Generation, Trauma, and Memory (2019).

Phyllis Lassner is Professor Emerita in The Crown Center for Jewish and Israel Studies and The Gender Studies Program at Northwestern University, USA.  Her publications include British Women Writers of World War II (1998), Colonial Strangers: Women Writing the End of the British Empire, and Anglo-Jewish Women Writing the Holocaust (1998). She co-edited the volumes Antisemitism and Philosemitism in the Twentieth and Twenty-first Centuries: Representing Jews, Jewishness, and Modern Culture (2008) and Rumer Godden: International and Intermodern Storyteller (2010). Her most recent book is Espionage and Exile: Fascism and Anti-Fascism in British Spy Fiction and Film (2017).

“This excellent collection of essays, edited by two internationally celebrated scholars, will be crucial reading for anyone interested in the twenty-first-century legacies of Holocaust representation, as they appear in genres ranging from testimony, video-testimony and poetry to graphic novels, comics and photography. It revisits classic works and debates as well as introducing important new perspectives such as those of trauma studies, gender and sexuality, animal studies and the third generation. This Handbook sets the conceptual scene for literary and cultural Holocaust studies in the current era.”

—Sue Vice, Professor of English, The University of Sheffield, UK

"Comprehensive, profound, intellectually daring, Aarons, Lassner and the scholars they have assembled in this remarkable collection have begun a conversation about the representation of the Holocaust in the twenty-first century that will define the terms of that conversation.”