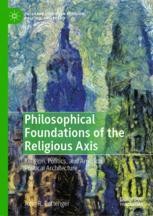 Philosophical Foundations of the Religious Axis

This book discusses the evolution of three philosophical foundations from the twelfth through the eighteenth centuries that converged to form the basis of liberal democracy’s approach to the place and role of religion in society and politics. Identified by the author as a “religious axis,” the period of convergence promoted rational and empirical investigation, enabled the development of diverse religious beliefs, and affirmed religious liberty and expressions amidst pluralist politics. The author shows that the religious axis’ three philosophical foundations—epistemic, axiological, and political—undergird the political architecture of American liberal democracy that designed a containment structure to protect a vast array of religious expressions and encourage their presence in the public square. Moreover, the structure embodied a democratic ethos that drives religious and political pluralism—but within limits. The author argues that this containment structure has paradoxically ignited frenzied fires of faith that politically threaten the structure’s own limits.

John R. Pottenger is Professor and Chair of the Department of Political Science at the University of Alabama in Huntsville, USA. He has served as an NEH research fellow at UCLA and UC Berkeley on philosophy and history of the scientific revolution; Mellon Foundation seminar director at the College of William and Mary on liberation theology; speaker at Moscow State University, USSR, on American political science; visiting professor at the Romanian-American University on public policy; lecturer at the Institute for World Economy of the Romanian Academy on American politics; and workshop facilitator in Egypt, Russian Federation, Ukraine, and Uzbekistan on civil society. He is the author of Reaping the Whirlwind (2017) and The Political Theory of Liberation Theology (1989).

“John Pottenger provides an incisive exegesis of how the philosophical foundations of the American political republic created a dynamic containment structure for both democratic politics and political religious pluralism. In particular, he accents how fragile this structure is as it is besieged today by evangelical advocates who seek to propagate a Christian commonwealth contrary to the Founder’s vision of a polity open to both religious and secular perspectives. Pottenger’s resuscitation of the philosophical foundations of US religious pluralism and civil discourse is essential reading for anyone concerned with the growing secular-religious divide that threatens the nation’s democratic future.”

“John Pottenger’s book explores the nexus of religion and politics throughout American history—from the evolution of what he calls the ‘colonial collusion between Church and State,’ to the current benign relationship between these two institutions. His critically important question in this volume is if this new dynamic is sustainable. He deftly analyzes how philosophy and political thinking justified the development of the Constitution, its resulting dynamic inter-play to both protect and limit religious liberty in the public square, and the arguments that challenge its boundaries. Readers will have much to consider in this volume!”

“John Pottenger focuses upon what he characterizes as the ‘containment structure’ historically moderating the tension between religion and politics in the U.S. Evangelicals have increasingly melded their conservative political ideology with political theology. Pottenger deftly addresses the challenge of welcoming a vibrant religious marketplace while also muting the ‘fires of faith’ so that the containment structure is not itself consumed.”