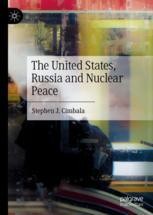 This book analyzes the United States and Russia’s nuclear arms control and deterrence relationships and how these countries must lead current and prospective efforts to support future nuclear arms control and nonproliferation.  The second nuclear age, following the end of the Cold War and the demise of the Soviet Union, poses new challenges with respect to nuclear-strategic stability, deterrence and nonproliferation.  The spread of nuclear weapons in Asia, and the potential for new nuclear weapons states in the Middle East, create new possible axes of conflict potentially stressful to the existing world order.  Other uncertainties include the interest of major powers in developing a wider spectrum of nuclear weapons and delivery systems, possibly for use in limited nuclear wars, and the competitive technologies for antimissile defenses being developed and deployed by the United States and Russia.  Other technology challenges, including the implications of cyberwar for nuclear deterrence and crisis management, are also considered.  Political changes also matter.  The early post-Cold War hopes for the emergence of a global pacific security community, excluding the possibility of major war, have been dashed by political conflict between Russia and NATO, by the roiled nature of American domestic politics with respect to international security, and by a more assertive and militarily competent China. Additionally, the study includes suggestions for both analysis and policy in order to prevent the renewed U.S.-Russian nuclear arms race and competition in new technologies. This volume would be ideal for graduate students, researchers, scholars and anyone who is interested in nuclear policy, international studies, and Russian politics.

“This is another excellent and thoughtful piece of research and analysis from one the leading thinkers about the nuclear condition.  Stephen Cimbala brings his considerable expertise and insight to bear in his latest examination of US-Russia nuclear relations, and argues forcefully that Washington and Moscow share a special responsibility for ensuring that nuclear weapons are never used again, whether deliberately, inadvertently or by accident, in a new nuclear age that is perhaps even more complex and dangerous than those that came before.”

“Unless the United States and Russia act quickly, the era of arms control in the first nuclear age, that began in 1972, will end in February, 2021 when the last arms control agreement between the two major nuclear powers, New START, expires. In his latest book on nuclear weapons, Professor Steve Cimbala provides suggested policies based on documented analysis that can prevent a new US-Russia arms race in this second nuclear age. This book is a must read for policy makers and analysts who focus on nuclear issues.”

—Lawrence Korb, Senior Fellow at the Center for American Progress and former Assistant Secretary of Defense