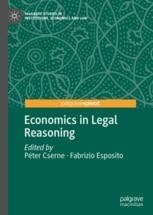 This Palgrave Pivot is the first book in the field of Law & Economics looking at the relationship between economics and law in legal reasoning. The book constitutes a reference point for the economic analysis of legal institutions, as legal reasoning remains the dimension of legal systems least explored by economists.

Despite their differences, economics and legal reasoning interact in many interesting ways. This book offers a fast track to these interactions. Both supporters and critics of Law & Economics will be exposed to a yet-to-be developed area of interaction between the disciplines.
This book will be of interest to economists, legal scholars, and Law and Economics specialists, and can be used as teaching material in courses on Law & Economics and legal reasoning as well.

Dr Péter Cserne is Reader in Law at Aberdeen University, Scotland, UK and an Extramural Fellow of Tilburg Law and Economics Center (TILEC), Netherlands. He has held visiting positions at Columbia University, University of Oxford, University of Genoa and University of Toronto and the Max Planck Institute in Hamburg. A lawyer and economist by training, he has published widely on legal theory, economic analysis of law, and contracts. He is the founder and convener of MetLawEcon, an international academic network for research on the foundations of Law & Economics.

Dr Fabrizio Esposito is a postdoctoral Fellow at the Université Catholique de Louvain and an Extramural Fellow at the Nova Law School, Lisbon, Portugal. Previously, he was a Postdoctoral Fellow at the Tel Aviv University, Israel, and defended his PhD thesis entitled Law and Economics United in Diversity at the European University Institute, Italy. He studies the relationship between economics, EU law, and legal theory with a particular focus on antitrust and consumer law. Fabrizio has joined Péter in the management of MetaLawEcon, an international academic network for research on the foundations of Law & Economics.
Show all
Reviews

“In Economics in Legal Reasoning, Péter Cserne and Fabrizio Esposito have brought together important new works which will bolster the dialogue between economics scholars, legal scholars, and legal practitioners on economics in legal reasoning, a topic that has not received enough attention so far. It will be beneficial reading for scholars, lawyers, and judges everywhere.” (Brian H. Bix, Frederick W. Thomas Professor of Law and Philosophy, University of Minnesota, USA)

“A fascinating collection of essays on the contribution which economics can make to legal reasoning. The two extremes are shunned:  that legal reasoning is necessarily self-contained; and that economic methodology can invariably provide a litmus test of what is legally appropriate. A more nuanced appraisal of the relationship between the two discourses is explored, offering a wealth of insights for lawyers and economists alike.” (Anthony Ogus, Emeritus Professor, Universities of Manchester, UK, and Rotterdam, The Netherlands)