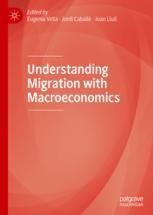 This edited collection includes (but is not limited to) contributions in the form of chapters from the participants of the Workshop on the Macroeconomics of Migration at the University of Sheffield in June 2018. Migration is one of the most debated issues currently and is a pervasive feature of our economies. While extensive academic work has looked at the microeconomic aspects of migration, an open question is to better understand the links between migration and macroeconomic aggregates, such as per capita GDP. This book explores this overarching question, which has hit the key political and social debates all over Europe. Countries that are traditionally viewed as hosting economies for immigrants, such as for instance the UK and Germany, are concerned by immigration, while sending countries, such as Southern and Eastern European countries, are concerned by emigration. The contributions in this edited collection analyse empirically and theoretically the challenges international economic migration generates both in sending and receiving countries, thus offering a comprehensive approach to the question asked above.

Eugenia Vella is Lecturer at the University of Sheffield, UK and Marie Skłodowska-Curie Fellow in Fundació Markets Organizations and Votes in Economics (MOVE) in Barcelona, Spain, working on the EU-funded project "Fiscal Consolidation, Unemployment and Labour Mobility in the Euro Area (EuroCrisisMove)”. Previously, she was Jean Monnet and Max Weber Fellow at the European University Institute in Florence, Italy. She obtained her PhD from the Athens University of Economics and Business, Greece in 2013. She has published in the Journal of International Economics, Journal of Economic Dynamics and Control, and Economic Inquiry, among others.

Jordi Caballé is Professor of Economics at Universitat Autònoma de Barcelona, Spain, a research fellow of MOVE and Affiliated Professor of the Barcelona Graduate School of Economics. He holds a PhD from the University of Pennsylvania, USA. He has served as dean of the School of Economics and Business (2003-2005) and as President of the Spanish Economic Association (2013). Prof. Caballé has published more than 35 peer-reviewed journal articles, including in the Econometrica, Journal of Political Economy, and Review of Economic Studies. He has also supervised 15 PhD theses.

Joan Llull is Director of MOVE, Associate Professor at Universitat Autònoma de Barcelona, Spain, and Affiliated Professor at the Barcelona Graduate School of Economics. He holds a PhD from CEMFI in Madrid, Spain. He has published in the Review of Economic Studies and the Journal of Human Resources, among others. He currently holds a Starting Grant from the European Research Council for his project "Dynamic Modeling of Labor Market Mobility and Human Capital Accumulation (DYMOLAMO)". He has editorial positions at Economic Journal, Review of Economic Studies, Labour Economics, and SERIEs - The Journal of the Spanish Economic Association.