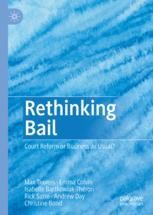 Court Reform or Business as Usual?

This book arises from a research project funded in Australia by the Criminology Research Council. The topic, bail reform, has attracted attention from criminologists and law reformers over many years. In the USA, a reform movement has argued that risk analysis and pre-trial services should replace the bail bond system (the state of California may introduce this system in 2020). In the United Kingdom, Europe and Australia, there have been concerns about tough bail laws that have contributed to a rise in imprisonment rates. The approach in this book is distinctive. The inter-disciplinary authors include criminologists, an academic lawyer and a forensic psychologist together with qualitative researchers with backgrounds in sociology and anthropology. The book advances a policy argument through presenting descriptive statistics, interviews with practitioners and detailed accounts of bail applications and their outcomes. There is discussion of methodological issues throughout the book, including the challenges of obtaining data from the courts.

Max Travers is Senior Lecturer in the School of Social Sciences, University of Tasmania, Australia.

Rick Sarre is Emeritus Professor of Law and Criminal Justice in the School of Law, University of South Australia, Australia.

Isabelle Bartkowiak-Theron is Senior Lecturer and Discipline Coordinator Police Studies in the School of Social Sciences, University of Tasmania, Australia.

Emma Colvin is Lecturer in the Centre for Law and Justice, Charles Sturt University, Australia.

Christine Bond is Senior Lecturer in the School of Criminology and Criminal Justice and Griffith Criminology Institute, Griffith University, Australia.

“In recent years much research on bail has focused upon methods of risk analysis. However, this project takes a more personal and humane approach, based on therapeutic jurisprudence perspectives, by focusing upon people who come before the courts with problems of mental illness, substance abuse, unemployment and homelessness, often in combination. This approach provides an important and useful counter-point to the growing use of algorithms in decision-making which may have the effect of de-personalising the process and adding to prison populations” (Arie Freiberg, Monash University, Australia)

“Travers et al’s new book provides a rich narrative account of bail decision-making in Australia. Their observations of 150 bail applications in four states are complemented by ‘shadowing’ of legal practitioners, analysis of court transcripts, and interviews and focus groups with key participants in the bail process, including magistrates, prosecutors, defence lawyers and bail service providers. This ethnographic approach reveals important insights into the operation of bail processes, such as the practitioners’ apparent lack of interest and engagement with reform issues, the sheer volume of materials processed and the resultant acceptance of ‘the possibility of mistakes in a fairly chaotic environment’, and the pressures inherent in a chronically under-resourced system. This book will be invaluable for researchers, policy-makers and justice practitioners involved in seeking, opposing, granting, administering, reviewing and understanding bail in Australia and beyond” (Lorana Bartels, Professor and Program Leader of Criminology, Australian National University, Australia)