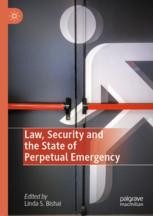 Law, Security and the State of Perpetual Emergency

Presenting diverse contributors from legal, academic, and practitioner sectors, this book illustrates how the distinctions between international and domestic law are falling away in the context of security, particularly in the responses to terrorism, and explores the implications of these dramatic shifts in the normative order. Fundamental changes in the powers of the state and the rights of populations have accelerated since the globalized response to 9/11, creating effects that spread beyond borders and operate in a new, as yet under-conceptualized space. Although these altered practices were said to be in response to exceptional circumstances — a response to terrorism — they have become increasingly established in an altered baseline norm. This book explores the (inter)national implications of exceptional legal efforts to protect states’ domestic space in the realm of security.

Linda Bishai teaches international law and the use of force as an Adjunct Professor at the George Washington University, USA. In addition to research on international law issues, she has focused on countering violent extremism and security sector reform.

“Linda Bishai has succeeded in bringing together a remarkable collection of essays on the myriad ways in which exceptions and exceptionalism continue to shape politics, law and national security. The international, historical and disciplinary diversity of the contributions is both impressive and valuable. While the book’s intellectual and empirical centre of gravity is the post-9/11 United States, the chapters range across continents, regime types, and historical antecedents of 21st century counterterrorism. Uniquely on this topic, many of the contributing authors bring both academic insight and practical experience to their work, with most having high level expertise in national and international legal practice, advisory boards, international institutions, and advocacy groups. As a result, the strength of this collection is not only to advance our understanding of the many seemingly perpetual emergencies in law and politics, but to spell out in detail what they mean in practice. In these contemporary cases, and in keeping with historical experience, executive powers created to deal with putative emergencies inevitably become normalized. The essays demonstrate the sheer variety of ways this takes place. The archetypal emergency shift of powers from legislative assemblies to executive or sovereign decision is still at work, but here we also hear about the extension of legal and political exceptionalism to new domains such as drone warfare, cyberspace, terrorist rehabilitation, policing, and special courts. The historically oriented chapters show how counterterrorism is not the only lens through which to understand these practices, demonstrating a striking continuity with colonialism and anti-mafia campaigns. Two decades on from 9/11, Law, Security and the Perpetual State of Emergency bears witness to the persistence of exceptionalism in the contemporary political and legal experience. “ —Andrew Neal, author of the book “Security as Politics: Beyond the State of Exception” (U. of Edinburgh Press, 2019)

“Law, Security and the State of Perpetual Emergency is a timely re-engagement with phenomena of emergency and exception, and whose consequences are as fascinating as they are elusive. By inquiring into how a state of exception has become normalized in world politics during the past decades, the contributors add fresh and critical insights into its wide-ranging effects on legal and political order. This book deserves to be read by anyone interested in exceptionality and its harrowing consequences.” —Jens Bartelson, Professor of Political Science, Department of Political Science, Lund University, Sweden

“In a masterful way, the authors of this book have fused together a monumental task of research and analysis from academia, practitioner and policy perspectives. In a world fueled by bipartisanship and black and white interpretation, this fresh contribution brings together expertise that is well recognized domestically and internationally. In a post 9/11 world and current COVID-19 pandemic, the appropriate globalized and localized responses to address national security concerns from various perspectives is needed more than ever. I personally have worked with the authors of this phenomenal body of work, and through their experience in and out of government and on the ground experiences, there are few who can match their collective insights and views. This book is a must read for any who seek to understand the legal, community, governmental and policy perspectives in the wider discipline and field of security.” —Muhammad Fraser-Rahim, Ph.D. Assistant Professor, The Citadel and Executive Director, Quilliam International

“International law provides for a wide range of possibilities how States may restrict human rights for the purpose of protecting vital national interests, including national security and public health, and even derogate from their human rights obligations in times of war and other public emergencies. These possibilities have always been misused by governments, but with the terrorist attacks of 9/11 and the so-called “war on terror”, the exception seems to have become the rule, even in democratic and rule of law-based States. In the United States, where compliance with international human rights standards was never high on the agenda, this has led to a dangerous erosion of the fundamental pillars of the post-World War II human rights architecture when even the non-derogable prohibition of torture was put at the disposal of national security interests. In Europe, where human rights are much stronger rooted in international law and where the judgments of the European Court of Human Rights and the Court of Justice of the European Union seemed to be non-disputable, nationalistic policies based on national security narratives led to the rise of illiberal democracies and to the Brexit. The current Covid-19 pandemic, which has led to unprecedented restrictions of our most cherished human rights all over the world, illustrates clearly to which extent the perpetual emergency has become the “new normal” and how easily the national security/anti-terrorism exception can be replaced by the public health exception. It seems only a question of time until the perpetual emergency will be justified by public order or public morals narratives in times of global crises and challenges. This timely book with diverse contributions from legal scholars and practitioners draws our attention in the midst of the Covid-19 emergency to these dangerous tendencies in both domestic and international law, when the perpetual emergency may gradually lead to an altered baseline norm.” —Manfred Nowak is Professor of Human Rights at Vienna University and Secretary General of the Global Campus of Human Rights

“As governments around the world struggle to contain diverse security threats, manage a pandemic, and navigate a financial crisis, this book could really not be more timely. Terrorism is becoming increasingly more broadly defined around the world giving more and more States the creeping power to act aggressively against their critics, and this in an age where the spheres in which States can now act with relative impunity have also expanded across borders and into the virtual world. This expansion has been predicated on the supposedly ‘exceptional’ nature of the threat that terrorism poses to the sovereign State  – a claim that has rarely been subjected to such forensic deconstruction as it is in this volume of essays. Three contributions in particular stood out for me, those of Linda Bishai, Norma Rossi, and Georgia Holmer. Bishai’s investigation of the Schmittean concept of sovereign exception, a concept which essentially also underpins the infamous ‘torture memos’ drafted by Bush administration lawyers, is all the more chilling when one considers how Schmitt’s legal philosophy led to his ineluctable embrace of the Nazi regime. Rossi finds fascinating parallels between the war on terror and Italy’s equally ill-named war on organized crime, describing how over time exceptionalism becomes normalized by state practice. Both Rossi and Bishai do us a great favor by forcefully reminding us that exceptionalism has both liberal and authoritarian roots, and that governments of all political stripes can be seduced by the lure of unrestrained executive power. After all, the Obama administration may have outlawed enhanced interrogation techniques, but it also greatly expanded the use of drone strikes. Holmer sets out a powerful case for making rehabilitation, rather than retribution, the cornerstone of penal responses to terrorist crimes. Policymakers who dabble in counterterrorism always seem to talk in zero-sum terms to the great detriment of effective policymaking. Holmer argues for a human rights-based approach grounded in the rights of the prisoner so that zero-sum efficacy is not allowed to derail what is always going to be an incremental process at best. The apostles of exceptionalism do not tend to do well with nuance. This important book reminds us that we undermine democratic norms at our peril, that terrorism is not, and has never been, an existential threat unless we allow it to be, that counterterrorism has provided a pretty poor return on the investment plowed into it, and that it remains as true today as it did two hundred years ago that when we trade freedom for security we often end up losing both.” —Tom Parker The author of Avoiding the Terrorist Trap: Why respect for human rights is the key to defeating terrorism